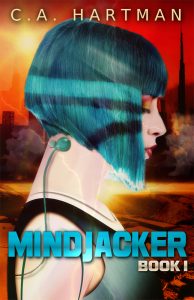 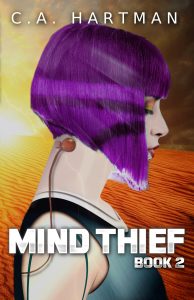 What’s worse? Confronting your biggest enemy… or your most terrifying fears?

Quinn Hartley has everything she’s ever wanted. She’s a top-level mindjacker now and has the pay to go with it. She has a loyal, trustworthy partner. She’s finally escaped all the perils of Downtown.

And she’s in danger of losing it all.

Quinn and the Protectorate cannot get their arms around the growing Black Jay threat. Her cop ex-boyfriend keeps threatening to throw her in jail. And, worst of all, someone evil is stalking her.

Not to mention her painful past keeps coming back to haunt her.

For Quinn, it comes down to one decision:

Do something utterly insane and face her worst fears… or lose everything. 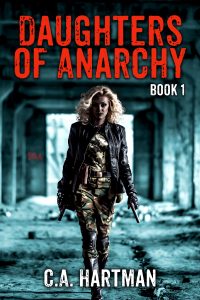 Stevie can alter her appearance through genetic manipulation. Her job affords her considerable power. And she’ll use both to clean up her corrupt City, one evildoer at a time… as long as she doesn’t get caught.

In Season 1 of Daughters of Anarchy, Stevie’s beleaguered city struggles to rebuild itself after decades of war. The City is bankrupt. The shaky economy benefits the wealthy. Greenery is scarce. Women genetically enhance their appearances to attract a shortage of men. Perhaps worst of all, the Feds have instituted mass surveillance to prevent more terrorist attacks. Stevie has only one goal: restore balance to her native City. And she does so with great finesse… until her risky endeavors begin to catch up with her. 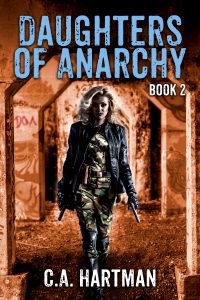 Are you a benefit to the City… or a detriment? You’d better hope it’s the former, or the Daughters of Anarchy will find you.

In Season 2 of Daughters of Anarchy, Stevie has given up her solo service to the City and joined the DOA, where she can do greater good while incurring fewer risks. However, Stevie struggles with abiding by new rules. A DOA confederate proves to be a thorn in her side. With Ronald Carr dead, she has no one at the Disc to protect her from the suspicious Director… who seems to know something about her mother’s past.

When the DOA attempts its most daring job yet, tragedy strikes. The women scramble to control the damage, while Stevie engages in a perilous game that could vastly benefit her City… but also end her service for good. 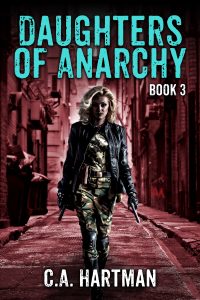 The enemy isn’t always who you think it is…

In Season 3 of Daughters of Anarchy, Stevie has narrowly missed getting cuffed by the Feds. Seth knows about her involvement in the DOA. And the DOA now has a very powerful ally at Federal Intel.

However, Stevie can’t stop thinking about her biological father and whether she should hunt him down. The DOA begins a series of violent jobs that will push them all beyond their limits, perhaps Stevie most of all. And finally, Stevie learns a terrible secret… and begins to discover who the real enemy is. 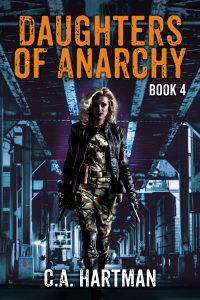 Stevie will take down her enemy. Even if she must go down with it.

In the final season of Daughters of Anarchy, Stevie and the DOA face their biggest challenge yet. Stevie knows the truth about Imelda Jane, and she’s determined to hunt down her killer. Leona is dead set not just on exposing the Federal Watch Program, but destroying it altogether. And in the background, Stevie hasn’t forgotten what matters most: the plans she made with Seth.

However, the harder Stevie and the DOA work to expose the Feds for the crooked agents they are, the more obstacles they face. Seth grows more uneasy about Stevie’s treacherous activities. The DOA faces a massive setback that could destroy them. When Stevie begins probing a side job, she becomes obsessed and makes a discovery so horrifying that it pushes her to take a huge risk… and pay the ultimate price. 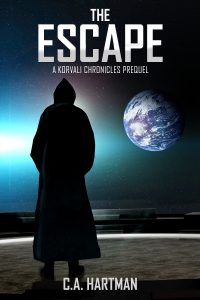 The time has come.

Eshel must abandon all that matters most to him: his home, his scientific work, his people.

He’ll violate one of his planet’s strictest laws, that Korvali citizens cannot leave or live among outsiders.

He’ll do it for his father… and to save his people.

It’s dangerous. Their odds of success are low.

Then they’ll find themselves on the most harrowing journey of their lives. 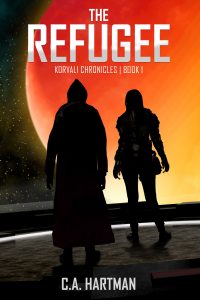 “In a genre that tends to be dated and full of formula-driven cliches, this book is a welcome change.” -an Amazon reader

The Korvali allow no outsider to visit Korvalis. They forbid their citizens to leave. They’re brilliant geneticists, but they refuse to share their genetic secrets with outsiders. Their xenophobia excludes them from the Orion Interplanetary Alliance, and the other planets don’t like or trust them. However, everyone tolerates the status quo… until a Korvali geneticist escapes his planet and takes refuge among humans on a starship.

The Refugee–the first of the Korvali Chronicles series–tells the story of Eshel, the Korvali refugee, and Dr. Catherine Finnegan, the human geneticist who befriends him, as they face the political, scientific, and interpersonal ramifications of Eshel’s living among outsiders. From censoring of their scientific work to intolerance for Eshel’s cold arrogance, struggles abound… until an alarming incident changes everything. 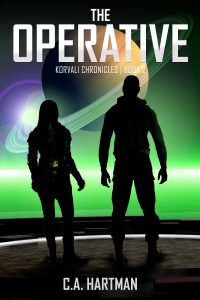 “One of the most interesting and most memorable protagonists to appear in years.” -K.L. Roberts

“Even better than the first book in the series, and the first one was great.” -Amazon reviewer

The Operative, the second novel of the Korvali Chronicles trilogy, has Catherine, Eshel, Tom, and Snow facing new adventures… and new dangers. A violent incident on Suna thrusts Catherine into the perilous covert world of biocracking, where stolen genetic patents are bartered among Sunai criminals. A secret project involving Eshel’s genetic work shows substantial promise for Catherine and Holloway… but also comes with tremendous risk if discovered by the increasingly suspicious Commander Steele. And despite the best of intentions, romantic connections unexpectedly develop—or rekindle—even when they’re fraught with difficulties.

Finally, growing only more powerful living among outsiders, Eshel remains the center of escalating tensions between the Corps, the Alliance, and the Korvali… until something shocking happens that will permanently transform the political landscape for all. 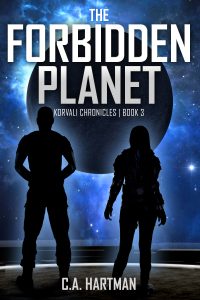 “The tension built in the last third of the book just about gave me heart palpitations.” -C.E. Crowne

On Starship Cornelia, Catherine and the crew are recovering from the Korvali clone attack that left two dead and sent 14 to sick bay. The Space Corps wants revenge, the Alliance wants to keep the peace, but Eshel has another idea that seems to fall upon deaf ears. To protect everyone, the Corps sends Eshel to hide among the Sunai. However, Eshel doesn’t go to Suna… he goes to Korvalis along with Ashan, on a secret mission that only Captain Ferguson, Commander Yamamoto, and Grono Amsala know about….

The Forbidden Planet, the final book of the Korvali Chronicles trilogy, takes us to Korvalis, a planet with vast oceans, pristine forests, and a people who are highly intelligent but who have shunned outsiders for centuries. But among them is the vokalis, the multi-clan faction of rebels who seek to overthrow the corrupt leadership and who’ve begun plotting now that Eshel and Ashan have returned. As the conflict on Korvalis escalates, Eshel, the vokalis, and their non-Korvali allies experience setbacks and betrayals, culminating in a large-scale battle of wits worthy of only the Korvali. And once beyond the point of no return, Eshel, Catherine, and the others must face the sacrifices that come with revolution.