Daughters of Anarchy: Season 3 is Published! 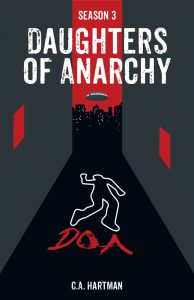 Quick announcement: for those of you who’ve been waiting for the third season of Daughters of Anarchy, I’m happy to report that it’s done and published. It’s available in eBook form on all the major retailers (iTunes, Kobo, Amazon, and Barnes and Noble), and the print version is ready to roll as well if you’re a love-the-feel-of-paper or an I-hate-the-glare-of-eReaders sort of person.

One beta reader called DOA the best of the series so far. It’s definitely the most violent. Episode 8 is pretty freakin’ intense.

I’m working on the fourth (and last) book of the DOA series, and hope to release it in good time.

If you haven’t begun the Daughters of Anarchy series, check out Season 1 today and see if it’s your cup of Joe. If you like your dystopian science fiction with a strong dose of crime thriller and a hint of noir, and you like your badass female protagonists, you’ll dig DOA.