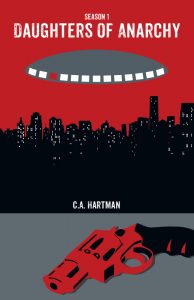 [Spoiler Alert]: You need to have read DOA 1 to avoid spoilers.

Organizing a novel into chapters requires making important choices. You can do short or longer, name each chapter or merely assign it a number, have each chapter include the point of view of one character at a time, etc. There are benefits and drawbacks to each way, and there’s no real right or wrong.

I organized DOA like a cable television series: i.e. four “seasons” (books) with 10 “episodes” (chapters) each. Thus, the episodes are long, but they include multiple scenes and developments that advance the plot (and the many subplots). Each episode includes a variety of scenes for these various plots, whether it’s Stevie chatting with Seth, Stevie researching and then going after Steeple, Stevie researching and then confronting Ronald Carr, Stevie’s interactions with Pomade (and his girlfriend), etc.

However, sometimes it’s possible, even fun, for each episode to have a theme, something that embodies what’s going on in the episode and that makes it unique from the others. In some cases, the title (and theme) can have multiple levels.

Here are the DOA 1 chapter titles, and the importance of each:

Nice To Meet You: This is what Stevie says to Library guy, just before she pulls out her Oakenfold and kills him. It’s dramatic (and darkly funny) to tell someone it’s nice to meet them, and then shoot them. It also embodies Stevie’s two sides: her desire to be polite in any given situation, along with her desire to rid the City of those who bring it harm. On another level, given that this is the first episode of the first season, “nice to meet you” is in some ways directed at the audience. It’s as if Stevie’s saying, “Nice to meet you, reader. I’m polite but I kill bad guys.”

Good Taste, Good Manners: This second episode lets you in on more of the culture and “rules” of Stevie’s world. What is considered good taste or good manners? In Stevie’s mind, she hears her own mother comment on Seth’s taste and manners, reflecting that his dislike of Yellows shows good taste but his commenting that Stevie would “look good with longer hair” shows less-than-ideal manners. Overall, this is a world where manners are important to Stevie (and her mother) but lacking in the average person (although not necessarily Seth), while taste refers to the external quality of things (like cheap yellow hair). By this standard, Pomade shows good “taste” but abysmal manners. Overall, this title underlies that things like taste and manners can be a cover for less ideal traits.

Man’s Best Couture Collie: By now, you know a “couture collie” is a dog that’s been genetically modified to look the way its owner wants it to look. These changes are purely cosmetic, focusing on fur thickness, shine, and color, as well as adornments to a dog’s tail, size, etc. They’re quite expensive as well. Couture collies are meant to signify the shallow aspects of Stevie’s society, that in a post-war world where many still struggle financially (and dogs are a rarity thanks to the 2nd war), dogs aren’t companions so much as they’re status symbols. This is seen clearly with Blonde Bob, who couldn’t afford the couture collies that made her feel special in front of others but whom she neglected behind closed doors. This a good metaphor for west bank folks in affluent neighborhoods, who Stevie spends much of her time targeting in Season 1.

The Passage of Truth: This is the chapter where Stevie returns to her native Hood and hangs out with Mobius. They visit the Passage, filled with murals that offer strong but controversial messages about the ills of their society, from the ravages of war to the way the Financials have “pissed” on their world. In a City that’s filled with couture collies, Rosa Queens, and people like Steeple, Krokus is where people wear brown (not black), bright colors (not muted ones that the rest of the rainy, drab City wear), create art, and tell the damned truth on that wall of murals.

Feckless Misspent Privilege: I love the word “feckless.” I picked it up from watching Billions, a Showtime show that I love and that had some influence on DOA 1. In this chapter, we find out who defaced the Passage, and Stevie risks her job and her goals to expose the young men. And why? Because who hasn’t watched others shake their heads in judgment about inner city black people rioting and “destroying their own neighborhoods” after a gross misuse of power and lack of justice, while no one condemns the disgusting absurdity of watching middle or upper class white kids piss on everything they’ve been handed in order to vanquish their boredom and do bad things. Read The Great Gatsby or watch Pretty in Pink, both of which capture the theme of misspent privilege.

Sleepless in Artemisia: This is a simpler title, a nod to “Sleepless in Seattle” and a reflection of Pomade and his girlfriend’s dysfunctional, self-involved relationship squabbles and their obliviousness to how it impacts others, including Stevie and her need for sleep. The sleep deprivation brings things to an interesting head.

Roses are Red, Violets are Dead: This is an insider phrase of warning among Pansies (pansies and violets are in the same flower genus, Viola). Stevie uses this phrase to gain access to Marigold and knock him off. It’s also a statement of irony, since this “violet” (i.e. native Pansy) winds up dead instead of safe, as does another later when he clotheslines and attacks Stevie in an alley.

Narcissus and Echo: Narcissus and Echo are characters from Ovid’s Metamorphoses. Echo is cursed by Hera and unable to speak other than repeating what others say. She falls in love with Narcissus, who rejects her love and proceeds to fall in love with his own reflection until he wastes away. This title refers to Pomade (a true narcissist) and his girlfriend Amanda (who pined for him)… and the conclusion of their terrible connection.

Wasn’t Expecting You: A rather ordinary title, but with a lot of pain attached. “Wasn’t expecting you” refers to Ronald Carr’s surprise when Stevie shows up to the Larkspur Cafe and asks to meet where there are no eyes. He wasn’t expecting her, or what she had to say. Likewise, it refers to the chapter’s end, when the masked person who breaks into Stevie’s apartment, grabs her, and ties her up turns out to be the person she trusts most.

How You Like Me Now?: I love this saying, because it perfectly captures how one feels after having revealed something important about themselves, especially something that makes others take pause. This could be Stevie’s question to Seth: you’ve taken me out and expressed sexual interest in me, but what do you think of me now that you know the truth about my extracurricular activities? Likewise, it could be Seth’s question to Stevie: how you like me now that I’ve learned the truth, broken into your home, and shown you my anger… and after I turn you into the authorities? Here, we have the story’s two main characters dropping their facade and seeing the other for who she (he) really is, good and bad.