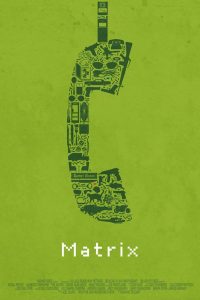 The Matrix is one of my favorite science fiction films of all time.

For me, nothing beats that opening scene with Trinity. Now the special effects are ho-hum, but at the time they were groundbreaking. Not to mention that Trinity was awesome and remains to this day one of my favorite female sci-fi characters. If I had dark hair and wasn’t a lazy-ass who hates dressing up, I would rock a Trinity cosplay at comic con.

I own the movie, of course. All three, actually. I’ve listened to the commentary and watched all the special features. Yet, I’d never seen The Matrix on the big screen. Fortunately, the Denver Film Society and their annual sci-fi film series changed that. I got to see it on the IMAX screen, actually (not technically the “IMAX experience,” but who gives a shit… I saw The Matrix in the big screen!).

I still love that opening scene most. Interestingly, as mentioned in my “strong female character” article, Roger Ebert had an interesting take on her:

“Carrie-Anne Moss, as Trinity, has a sensational title sequence, before the movie recalls that she’s a woman and shuttles her into support mode.”

Trinity and my girl crush aside, I liked Keanu Reeves in the role of Neo. I’ve always liked him and  found it irritating when people criticized him. Not every actor needs to be an Al Pacino or a Samuel L. Jackson or a Tom Cruise and hog up the entire screen with his big personality and big emotions. There’s something to be said for a quiet, subdued actor with perhaps a more limited range of roles but who emits a positive energy that makes you like him. When it came out that Keanu is a generous, amazing guy who’s had a difficult life, people were forced to see him differently.

Keanu, I liked you from the start. I didn’t need the proof like the rest of those bastards!

Anyway, I loved the Blue/Red Pill scene, too. I loved Laurence Fishburn as Morpheus and the amazing (and apparently tricky) effect of having Neo reflected in his sunglasses. And, the scene is such a great transition into the film’s second act when Neo decides to “see just how far the rabbit hole goes.”

I really dig mind-bending films, and this one certainly qualifies. There are a lot of layers and themes to The Matrix:

Unlike many, I liked the other films in the trilogy. They don’t stand up to the first, but I still enjoyed them.

More on The Matrix later…