Why I No Longer Actually Love “Love Actually” 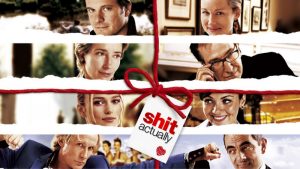 I borrowed this image from a Jezebel article on this topic. Click image to read it.

I loved Love Actually the first time I saw it. And I loved it every time I’ve seen it since its release, which adds up to a lot of viewings if I watch it every December.

But this year, something changed. It all started with the stupidest line in the film: “Shut up, Miss Dunkin’ Donut 2003.”

Seriously? In a witty British film?

For one thing, the line is stupid and not up to snuff with most of the film’s humor. It’s also inaccurate, as the donut chain didn’t find its way to Europe until 2015, making one wonder why a Portuguese man living in southern Europe would use such a reference (hint: the writers made him do it). Finally, and most important, it was a cheap, fat-shaming insult to Aurelia’s sister. More on that thing later.

I watched this last week with a girlfriend. The guys came around and watched the second half with us. When that donut line dropped, everyone laughed. Loudly. Really, I said? That line? The next day, I thought more about the donut line and what it meant. Then a flood of realizations hit me about one of my favorite films. And they weren’t good.

Let’s start with the donut thing. When Jamie appears at Aurelia’s home and asks her father if he can marry his daughter, Dad produces Aurelia’s sister, who is heavier (and not nearly as hot) as Aurelia. From there the jokes commence and Dad insults the sister on multiple occasions. The whole town follows Jamie and the family to watch Jamie propose to Aurelia, who he barely knows and with whom he’s never had a real conversation. The message? Fat girls aren’t worthy of love, even their father’s love. But women who are super hot get proposed to even when the doting lad doesn’t even speak her fucking language.

True, Aurelia’s sister wasn’t exactly a well-mannered girl. Yet, Aurelia took a few shots at Jamie in Portuguese, making her seem more like his snarky ex (the one who fucked his brother). But perhaps such insults are more tolerable coming from a hot chick.

Then, I thought some more. And came to a few more realizations:

See a pattern yet?

Sure, there are many movies about the awkward or under-appreciated getting the hottie. However, in those, the main character is usually in HIGH SCHOOL, when all we care about is getting the hottie, and those films showcase one unrealistic romance at a damned time rather than a dozen of them, for fuck’s sake.

So, let’s look at the not-hot girls of Love Actually. How did they fare?

In other words, the hot chicks get adoring men. The average-looking women get little or nothing.

Is this some misogynist film brought to you by the patriarchal oppressors of our time? Hardly. But I did a search and it took about 2 seconds to find that many considered the film to be sexist.

Moreover, there’s the fat-shaming: Aurelia’s sister and her love of American donuts, BIlly Mack’s sweet manager (who Billy calls ugly and fat in public), and the insulting of the Prime Minister’s beloved’s thighs. Aren’t we past this yet? The 80s and dieting to stay thin are over, dude. Grow the fuck up.

Finally, there are the messages about love. I didn’t think much about this until coming across an article in the Atlantic entitled Love Actually is the Least Romantic Film of All Time, which then had a follow-up article to further buttress his argument and address criticisms. In a nutshell, he notes that the romances in the film are based entirely on physical attraction and that the couples bond or marry after knowing very little about one another. He adds that the romance is either extremely easy, or doomed.

I know, I know… I’m analyzing a film whose primary goals are to be funny and heartwarming. And it’s both. But film influences our culture just as much as it reflects it, and I think this one takes us backward. The crude and hilarious American Pie films (yes, I own all three) do more justice to love and women than Love Actually does.

No offense, Love Actually. The romance is over.