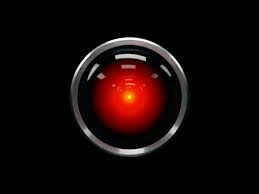 I watched Stanley Kubrick’s 2001: A Space Odyssey for the first time nearly 20 years ago. I thought it was great. And just recently, I watched it again. This time, I concluded that it isn’t great… it’s a masterpiece. But that’s another article for another time.

The visuals in this film require volumes all their own. The use of color in film is something many don’t notice, at least not consciously. And in 2001, it’s probably tough to notice color in a film that’s primarily set on colorless machines making their way through the black vacuum of space.

Yet the sterility of white at the space station, the dramatic black of the monolith, and even the pink suits of the space flight attendants make a strong statement about those things.

And then there was red. The color red shows up many times in 2001: for example, in the molecule-like chairs the scientists sat on in the space station, in various parts of the spacecraft (particularly in the cockpit), in HAL’s omnipresent eye, and, at the very end of the film, in the new life form created from the astronaut’s death. The color is such a marked contrast to that of the rest of the film, to the point of being a shock. In this very sterile, clean, futuristic, quiet, spacious, even lifeless place, here is the color red, something that’s life-filled, loud, stimulating, and messy.

Red is the color of blood, of the heart. It’s the color of life, and can represent strongly passionate feelings, from anger and aggression to love and sexual passion.

The strong color of those chairs sits in sharp contrast to the expansive and somewhat lifeless surroundings of the space station, and even to the somewhat banal and lifeless conversation of those who sat upon the chairs. And the chairs, with their oval and almost disc-like shapes, remind me of erythrocytes (red blood cells). The red in the crafts and particularly the cockpits remind us of the life that’s aboard, but that it’s somewhat insignificant compared to the vast white crafts or stations, or the darkness of space… reminding us of how tiny we are when viewed from the perspective of our galaxy.

And what of HAL’s eye? HAL, for his being a machine, had some human qualities that even the astronaut seemed to acknowledge. One film reviewer noted that HAL had the most “life” of all the characters in the film, all of whom seemed lacking in feeling or personality. Perhaps the red showed us this, showed us HAL’s strong feelings, even his “human” frailty in the form of aggressive tendencies, tendencies that are alluded to early on in the film. And recall the computer room, HAL’s brain center… red.