Epigenetics II: X-Inactivation and Why Women are “Stripy” (and Calico Cats are Patchy) 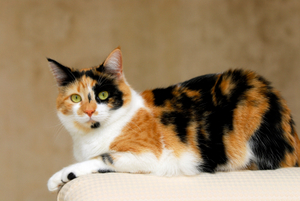 In honor of the release of The Refugee, I explained the basics of epigenetics in a recent post. Recently, I came across a video from IFL Science entitled, “Why women are stripy.”

It turns out women really ARE stripy, and epigenetics is the reason.

So DNA expression (i.e. gene expression) is dependent upon other factors that control if and when a gene is turned on, turned off, or regulated in its expression in some way. These other factors are what we call epigenetics, which can include how the DNA is coiled and stored in a cell (exposed genes are expressed, hidden ones are not) as well as how and where methyl groups will attach themselves onto the DNA molecule and impact expression.

Humans have 23 pairs of chromosomes, one set from Mom and one from Dad, and each is loaded with genes. The 23rd set are the sex chromosomes: XY for guys, XX for girls. It wouldn’t do for both X’s in each cell to produce gene products, as this would mess everything up. So, one X is inactivated in each cell in your body. This process is done epigenetically very early in fetal development, where the inactivated X DNA is packed very tightly and heavily methylated, telling the body to leave it alone and not let the DNA code for RNA and then proteins.

The thing is, in some cells Mom’s X gets inactivated; in others, Dad’s does. Once the cells decide who “wins,” they then begin to divide and make more cells with an X with the same origin. This creates a “striped” pattern in women’s bodies, where strips of their bodies have cells with Dad’s X and other strips have cells with Mom’s X. Of course, you can’t actually see these stripes in humans. But you CAN see them in calico cats.

Calico cats are patchy in color for the same reason, as the gene for coat color is on the X chromosome. So you get one coat color from Mom and another from Dad, and you get those patches.