Feminism and “The Girl with the Dragon Tattoo” 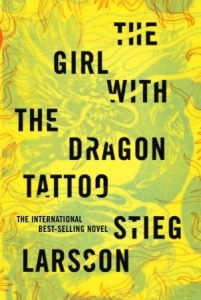 I avoided this book for years because of the sexual abuse content, even after watching the film twice. But my mom, a heavy reader, urged me to read it, and I’m glad I did.

I would consider this a feminist book. A feminist book written by a man. It explores the themes of patriarchy and male entitlement gone very wrong. It has a fascinating female protagonist who struggles against a variety of types of oppression, another strong female as Blomkvist’s partner Berger, interesting female members of the Vanger family (good and bad), and a strong view about the repugnance of sexual violence against women. The main character involves himself sexually with a few different women, but doesn’t seem to care about the women’s ages (which vary from 20s to 50s), and makes no mention of body parts he can’t stop staring at or where they rank on a 1-10 scale or how manly he feels after going to bed with one. To him, they are women he finds attractive and enjoys being sexual with, not objects to fuck. He treats Berger like an equal, and she does the same for him. He treats Lisbeth like a person–not a freak (like many), not a victim to exploit (like Bjurman), not a sexual object (like Armansky). In the end (spoiler), women come to take control of a formerly male-dominated empire, not because they’re women, but because they’re qualified and it’s the wise decision.

The book also explores social justice ideas through Salander, whose control over her own life is in the hands of institutions that don’t understand her. It shows us that women who aren’t protected by the system or by society will be exploited by men like Bjurman or Martin. Through Blomkvist, the book explores financial corruption and the role of the media and others in furthering that corruption instead of questioning rich and powerful financial powers who need questioning.

Because of these things, this interest in social ills and social justice, the author seems like someone I would have actually wanted to meet in person… and I never say that.

After writing this review, I did some quick research on Stieg Larsson. In his younger years, he wrote science fiction and was actively involved in sci-fi-related organizations in Sweden. He is deceased how, but he was a journalist who specialized in reporting on far right extremist groups. His profession yielded him numerous death threats. At the age of 15, he witnessed his friends gang rape a young girl. His girlfriend/partner stated that the event and his lack of action against it upset him deeply and influenced his work and life from then on. She considers him a feminist.

It took me a while to get used to the writing style. The book breaks a lot of rules the books teach these days: telling instead of showing, a ton of description that doesn’t move the story forward, feeding the reader information that’s obvious, writing from multiple POVs at once, dialogue that sounds the same no matter who’s speaking, plus writing with a lot of narrative distance when going deep would have made it more powerful. I finally realized it’s journalistic writing. And it totally works for a story like this, where there’s a ton of information that a journalist would have to sort through to make a good story. After the first 100-150 pages, I got sucked in and had a very difficult time putting the book down. Kudos to the author for that too. Screw the damned writing rules… write a good story that makes people want to turn those pages. This dude did that.

Rest in peace, Stieg Larsson. Your contribution to women and the betterment of the world will not go unappreciated.