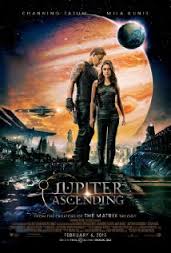 For the better part of a year, I looked forward to Jupiter Ascending. After all, we’re talking about Andy and Lana Wachowski, of The Matrix Trilogy fame, an enduring fave of mine.

I liked the movie. It had great actors, interesting characters, intriguing visuals, and a complex world. Its weakness? It failed to develop some of these interesting aspects and instead relied upon a familiar action movie framework, replete with very long action scenes, a hero-rescues-hapless-girl setup, laying waste to major buildings in large cities, CGI buildings falling apart while the protagonist scrambles to avoid plunging to her doom, unimaginative antagonists. I like a good action movie, sci-fi or not, but it’s a bit of a shame when intriguing ideas are left underdeveloped.

Sci-fi is about ideas. Ideas that make us think, imagine, speculate, wonder. Or at least make for interesting storytelling. Jupiter Ascending had some good ideas, but it had so many of them and they were explained by various characters in a passing way rather than developed. For example:

The idea of Earth being one of many inhabited planets ruled and managed by some imperialist family. This in itself could have driven a lot of the film, especially given that the protagonist, along with all humans, didn’t even know that life existed on other planets. Such a discovery would captured the imagination when the protagonist realizes that not only are we not alone in the Universe, we are a pawn in a much larger game.

“Splices”–those genetic hybrids made of spliced DNA of humans and animals. Channing Tatum plays one of these characters (and does a good job of it), playing essentially a human-wolf mix who, when angry, may possibly tear out an enemy’s throat with his teeth. Genetics was a theme throughout this film, but as with most sci-fi films, it’s used as a plot or character device rather than developed in any real way. The possibilities of genetics, idea wise, are immense.

The spontaneous creation of a person who has an identical DNA match to a previous person. Not feasible from a numbers perspective, but still an interesting idea. This idea served as foundation to the film but was barely mentioned.

The ability to live for millennia with a little help from science. Again, not especially feasible, but still interesting.

The Matrix had plenty of action, but it was its ideas that blew our minds. Too bad Jupiter Ascending didn’t do the same.