Heinlein’s “Stranger in a Strange Land” 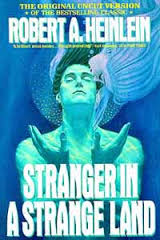 Okay, where to start… Let’s begin with the negative.

I began SISL in 2013, read a few chapters, and gave up because I found it dull. This year, I said I was going to finish it, no matter what. It took all I had to do so. Other than the parts told from Mike’s POV, I found SISL dull, tedious, and in need of a good content editor. Much like Asimov’s “Foundation,” the author uses his characters (particularly his male characters) as a delivery method for his many ideas and he expounds endlessly. To say that I found this irritating would be a great understatement. It’s mostly for this reason that I found Jubal the most irritating character, and the sections from his POV were the toughest to get through. For Christ’s sake, Jubal, STFU!

Having said that, after about the halfway point, I began to find (some) redeeming things in the story. I liked Mike the most and his sections were read-worthy. The author’s ideas on sexuality, politics, religion, art, social mores, and humanity were interesting, even when I didn’t agree with them. There are numerous memorable lines, although so many that they lost their power. There’s plenty of blistering social commentary here, and I like that.

I read much of this book while in Central America, where I met my first of many wild monkeys. I found it remarkable how human their faces looked, and friend commented that he couldn’t imagine how someone could watch these animals and then deny evolution. Interestingly, the next day I read the section where watching monkeys was a vital turning point for Mike.

The views on sexuality were interesting, both progressive (especially for the times) but simultaneously backward and sexist. Much of this is seen through Jubal’s character. One could argue that Heinlein lauded more sexual freedom and equality among the sexes while still unconsciously clinging to those more conservative mores about sexuality, mating systems, and women. But one could also argue that Jubal’s eventual shift at the end represented a transition from old sexist ideas to more modern ones, that the younger generation (Mike) took power and showed him the way. Somewhat prescient, really.

I was also reminded of the book “Sex at Dawn,” which takes a good look at mating and sex in humans, and questions the idea of monogamy. Mike’s commune seemed to be consistent with some of the ideas in that book, making one wonder if Heinlein had also done some real research on this topic, rather than just blathering about it like most people.

Overall, SISL was painful to get through. But it did have some good ideas, I liked Mike very much, and it did have a worthwhile ending.