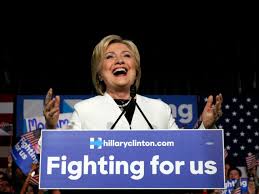 I rarely talk politics. I rarely post political memes on Facebook. In nearly a decade of blogging, I don’t think I’ve ever written about politics. But I have to make an exception today. Because something amazing has happened.

Hillary Clinton has clinched the Democratic nomination for POTUS.

I recall how excited I felt when Obama clinched the presidential election. Our first black president. A black family in the white house. The energy in Denver was electric at that time at the prospect of him and what he represented. Things finally felt like they were headed in the right direction. And I feel even more that way now.

I’m a Democrat; no big surprise there. And to be honest, I would have been happy with Hillary or Bernie taking the helm. But, quietly, I wanted Hillary. Not because what Bernie has done isn’t amazing – he’s ahead of his time and has paved the way for future change in our country. And for many, he’s more… likable. Yet, I preferred Hillary because I think it’s about damned time we had a woman president in this country.

It isn’t because I think Hillary will “represent women’s issues” because she’s a woman. It’s because she’s a woman, and one who is qualified to serve as POTUS. I have long felt, and very strongly, that what’s wrong with our world is that there are too many men in power. It’s imbalanced, it’s unjust, and it isn’t good for humanity. Power needs to be shared by both genders. This world is comprised of half women and half men, and thus a representative government should have roughly that proportion of men and women.

Assuming Hillary wins the presidential election, she will not only be our first female president, she will stand as a leader of a powerful country, and thus a world leader. She will serve as an example for countries who are less progressive than we are about women’s rights. She will serve as an example to a younger generation who will be raised with the idea that female leadership is a normal thing. She will inspire other women to step up and seek leadership, to get some influence on what kind of country (and world) we want to live in. And she will inspire a younger generation of men who will see the value in having women in power as well as men.

We still have several months until the election. Until then, I will cross my fingers that November will bring a victory that will make even bigger history.