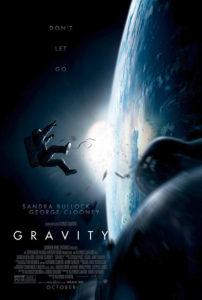 Last night I watched Gravity for the first time since it was released in theaters. It was about 9:15, and I realized I could watch the whole thing and still be in bed by 11. (i.e. at 90 minutes it’s short for a science fiction film.)

On second viewing, it wasn’t as stressful as it watching the first time. This story definitely follows the “get protagonist up into a tree and continue chucking rocks at her” model, where one thing goes wrong after the next without relenting until the very end.

I like the film. Anything that tries to realistically look at what it’s like to be in space is super interesting, and I liked the simplicity of the story and the performances. Plus, those views. Chances are, none of us will ever see Saudi Arabia from that perspective, or the Ganges during sunrise.

But I’d heard that a certain well-known astrophysicist had taken a few shots at the science of the film, so after I finished it, instead of going to sleep, I researched what was fact and what was fiction.

All films have both, even the best sci-fi. This seems to bother some, and half the time I think they’re just bringing up the flaws to sound important. Then again, fiery explosions in space are silly and I don’t like them because they aren’t accurate and aren’t necessary. (Just watching something silently splinter apart in space is crazy cool, so why would you have it any other way??)

I made this list not to criticize the film, which was quite good, but to learn a few things. So here are some science facts and science fictions from Gravity:

So there you have it. Learned something new all science-y and stuff.