Science Fiction and Fact: What are Neurotransmitters? 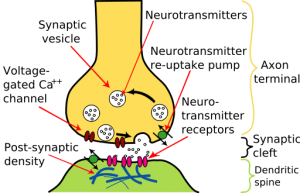 Two neurons communicating through neurotransmission. The neuron receives a signal, neurotransmitters released from vesicles, and then they bind to receptors on the next neuron.

The first time I can recall hearing neurotransmitters mentioned in science fiction was from Dr. Crusher on Star Trek: The Next Generation. Beverly Crusher was no ordinary ship’s doctor — the woman had a pretty strong understanding of the life sciences, including neuroscience, genetics, and more.

In my Daughters of Anarchy series, there are occasional mentions of neurotransmitters as the characters experience the behavioral and physiological effects of the substances.

So, what are neurotransmitters and why are they important?

Neurotransmitters are chemicals that enable the transmission of signals from a nerve cell (neuron) to another cell, whether a neuron, muscle cell, or gland cell. They play a huge role in our everyday functioning, and their imbalance can cause serious problems.

Here, I list the major neurotransmitters and the role of each:

Serotonin: Serotonin is involved in a wide variety of functions, including the regulation of mood, sleep, appetite, and pain. Many well-known antidepressants (e.g. Prozac, Paxil, Lexapro, Zoloft) modulate serotonin levels in the brain, as depression certainly impacts mood, sleep, appetite, and pain, often in unpredictable ways. A naturopathic doctor I know once characterized serotonin as the neurotransmitter of peace, love, and contentment.

Dopamine: Dopamine plays a major role in movement as well as mood. Parkinson’s Disease (as seen with Michael J. Fox) is caused by unexplained damage to an area of the brain high in dopamine neurons. Dopamine is also the neurotransmitter of motivation and reward. Areas of the brain rich in dopamine light up when we gamble (and win), when we fall in love, and when we use addictive drugs.

GABA: Gamma-amino-butyric acid is an inhibitory neurotransmitter involved in motor control and regulation of anxiety. Drugs that increase GABA levels are used to treat seizure disorders as well as anxiety disorders.

Norepinephrine: Norepinephrine is an excitatory neurotransmitter that’s important for attention/focus, sleeping, dreaming, and learning. Imbalanced norepi levels are implicated in PTSD (Post-Traumatic Stress Disorder) as well as bipolar disorder. Both disorders involve some level of agitation that can impact sleep, dreams (nightmares), and mood. In Daughters of Anarchy, Seth’s norepinephrine levels are referred to on a couple of occasions, as he suffers from nightmares and hyper-vigilance associated with his war trauma.

Epinephrine: Commonly referred to as adrenaline, epinephrine excites the central nervous system and is released during times of stress. It’s responsible for the increased heart rate and focus seen in the “fight or flight” response. If you’ve ever been in a car accident, or experienced trauma such as an attack (or the threat of an attack) or having been in a war zone, you know exactly what this feels like.

Of course, genetics and lifestyle play strong roles in how we regulate neurotransmitter levels, which is why some people seem to be naturally happy while others struggle, and why some become anxious very easily while others are unflappable.

Modern pharmaceuticals exploit these naturally occurring chemicals by manipulating the process you see in the image above, thus altering how the neurotransmitters are produced and transmitted in the body. However, because of our unique DNA and lifestyles, we all respond differently to such drugs. Give 100 people the same drug and some will respond well, others not so much, while others will develop problematic symptoms. This is why we have so many drugs for depression, for example.

I read somewhere that a certain kind of diets can alter tryptophan levels, thereby influencing serotonin levels, which then influenced aggressive behaviors. I’ll have to dig more to find out whether such an idea has any scientific basis at all. But it would sure make a good study… and an interesting science fiction story.