Snowpiercer: Haves and Have-Nots on a Train 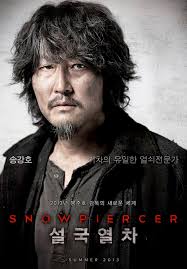 Not the American movie poster, but I liked this one because he was an interesting character.

Spoiler alert: This is a film analysis, so there are spoilers.

Snowpiercer, directed by Bong Joon-ho, has been at the Denver Film Society’s SIE Film Center for what seems like ages. Usually films have short life there (common in the indie film world), but this one did well. Once we saw it, I wondered why a film that clearly had a sizable budget and Hollywood aspects to it would be playing at the Film Center.

Well, it turns out there’s a feud between the director and Harvey Weinstein, who’s a producer on the film. Weinstein wanted it cut shorter, Joon-ho refused, so Weinstein severely limited the film’s distribution. Which explains why it’s not playing in other theaters.

Anyway, in the film, attempts to handle Earth’s global warming problem wind up freezing it, killing everyone and everything except those who happened to be aboard Wilford’s fancy train that circles the globe in exactly one year. Civilization manages to survive 17 years on this train that never stops. But as with most post-apocalyptic, dystopian stories, the civilization isn’t very healthy.

The train is the “vehicle” and metaphor for the stratification of society, where those in the front of the train live large–with their fur coats, jacuzzis, delicious food, and aquarium–while those in the tail are oppressed, forced to live in dirty clothes, sleep in tight bunks, eat gelatinous protein slabs doled out by those who control the resources, and occasionally give up their children for reasons we aren’t sure of yet. Partial spoiler: the protein source for the slabs is a pretty low form, and the kids aren’t used for education or entertainment.

Snowpiercer is reminiscent of Elysium, with its heavy-handed Have vs. Have-Not allegory, where the snooty white people with their absurdly comfy lifestyle don’t want to share their plentiful resources with the unwashed masses on Earth. It had moments of of Hunger Games as well, where the wealthy, excessive Haves of the Capitol ignore the suffering in the other districts, use video as one of many ways to oppress the masses, and even make the Have Nots look Dickensian dirty.

Snowpiercer even takes another step to make dang sure we know about the allegory when Tilda Swinton’s whimsically diabolical character, after freezing off the arm of a man who throws his shoe at the authorities, puts the shoe on his head and explains that shoes belong on feet, not heads. In other words, the 1st class passengers who paid to be up front shall stay up front where the good shit is, whereas those in the tail shall stay in the tail (foot) like they deserve. That is their “destiny.” Yes, they used the word destiny. That shoe-tossing act had its foreshadow-y importance, as the tail people got to the head… but not without a severe price.

So the oppressed decided to revolt, and this revolt is the movie’s plot. There have been other revolts, but none made it all the way to the front, where the B0ss Man (Wilford) resides. Wilford created the special train and is responsible for keeping it running 24-7.

The Leader and his band of supporters make their way forward, fighting militants with axes (this was pretty gruesome) and schoolteachers with guns, but occasionally stopping to check out the aquarium and greenhouse and to eat sushi.

When Leader Man finally has his showdown with Wilford, I could not help but think of the confrontation between Neo and The Architect in the 3rd Matrix film. In that film, after so much violence and action and fight scenes and effects, it came down to a very quiet conversation in a very quiet room between the Hero and the older, white male who’s been orchestrating EVERYTHING the entire time, including the revolts themselves. The scene in Matrix Revolutions was better.

The best thing about Snowpiercer was seeing the train cars, each more elaborate and luxurious than the next. It included a cast of somewhat unexpected actors playing interesting roles, including Kang-ho Song and Ah-sung Ko as a drug-addled father-daughter team, Tilda Swinton as the ruthless but spineless order-keeper, and Octavia Spencer as someone who kicks some ass.

Finally, the ending. A polar bear as a sign of hope. The freeze is melting, allowing life to survive. But how? How will a young woman and boy survive and reproduce? One pair isn’t enough to create a population that isn’t terribly inbred.