The Left Hand of Darkness by Ursula Le Guin 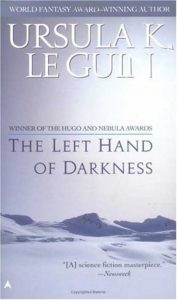 After I said I would read no more classic science fiction for a while, if ever, I caved and read The Left hand of Darkness when a friend loaned me his copy. I’m glad I caved.

This book includes many of the conventions of classic sci-fi: long and excessively detailed description, less focus on character development, using the characters and their dialogue as direct conduits to deliver the author’s ideas, and an element of dryness in the writing. Yet, despite these outdated elements, Ursula Le Guin delivered a story that was unexpected and, in my opinion, better than the Asimov and Heinlein I’ve read.

I got frustrated in the book’s middle, when Genry Ai galloped off to Orgoreyn. There were too many city names, character names, and too much jargon for me to keep track of, and I like jargon and complexity. I had no idea where the story was going and had stopped caring. Fortunately, I kept going. (I will keep going if I get past the first chapter or so, even if I hate a book, especially if it’s a classic. I’m stubborn that way). When Ai got imprisoned, my interest level climbed to a level I haven’t reached in a long time, never to plummet again.

What a beautiful tale of friendship, love, politics, and humankind. What an unexpected journey. I could go on and on, but I’ll get to the point and remark upon the things that stood out:

The theme of war and especially its predecessors: politics, patriotism, and xenophobia. Gethen is a place that didn’t know of life “out there” until Genly came around, and all are iffy about it to varying degrees. Karhide and Orgoreyn are at great odds with one another and on the brink of something bad. Borders are firm. Genly tries to work within these challenges to achieve his goal.

But it’s Estraven who represents looking beyond such human stupidities and thinking about what’s best for humankind. Take these passages:

Hate Orgoreyn? No, how should I? How does one hate a country, or love one? Tibe talks about it; I lack the trick of it. I know people, I know towns, farms, hills and rivers and rocks, I know how the sun at sunset in autumn falls on the side of a certain plowland in the hills; but what is the sense of giving a boundary to all that, of giving it a name and ceasing to love where the name ceases to apply? What is love of one’s country; is it hate of one’s uncountry? Then it’s not a good thing. Is it simply self-love? That’s a good thing, but one mustn’t make a virtue of it, or a profession… Insofar as I love life, I love the hills of the Domain of Estre, but that sort of love does not have a boundary-line of hate.

As I ate, I remembered Estraven’s comment on that, when I had asked him if he hated Orgoreyn; I remembered his voice last night, saying with all mildness, “I’d rather be in Karhide…” And I wondered, not for the first time, what patriotism is, what the love of country truly consists of, how that yearning loyalty that had shaken my friend’s voice arises and how so real a love can become, too often, so real and vile a bigotry. Where does it go wrong?

It’s Estraven who represents thinking beyond Us versus Them (xenophobia) or Our Little World (“patriotism”) and focuses on something larger. He uses his considerable ability to think long term and to plan several moves ahead, as well as his political acumen, to bring about Genly’s goal. [BIG SPOILER] And he makes the ultimate sacrifice to do so. This putting aside himself and his own needs to consider what’s best for his people reminds me somewhat of Eshel (of my Korvali Chronicles series)… which is probably why I liked him so much.

The ideas around gender. Making the Gethenians gender neutral allows the opportunity to examine gender conventions. These ideas aren’t the main them of the story in my opinion, but they pop up now and again. Take this Genly quote:

I thought, shivering, that there were things that outweigh comfort, unless one is an old woman or a cat.

An interesting belief, that old women need comforts more than old men or younger folks. And an interesting tie to cats, which are often seen as feminine.

It’s interesting that the story is told by a man and by a second person who is gender-neutral but is referred to as “he” and is, from what I could tell, written as a male. What more interesting to me is the author’s views on women with regard to war:

But on Gethen nothing led to war. Quarrels, murders, feuds, forays, vendettas, assassinations, tortures and abominations, all these were in their repertory of human accomplishments; but they did not go to war. They lacked, it seemed, the capacity to mobilize. They behaved like animals, in that respect; or like women. They did not behave like men, or ants.

This particular quote stood out most to me, as it seems reflective of the time Le Guin was writing in (mid-century), but also raises many interesting questions about male- and femaleness. But I will reserve such discussions for another article.

The love. I love stories about love. Most people do, I think. This story proves that love doesn’t need to be romantic or sexual to be compelling. Love goes far beyond those things. These two people developed a mutual love, one never discussed, out of a shared desire for a larger goal, something that benefitted both their peoples.

Someone on Goodreads commented that this book isn’t science fiction. I couldn’t disagree more. The Left Hand of Darkness is the very epitome of science fiction, of “the literature of ideas.” A worthwhile read for me.