The Martian: Science vs. Fiction 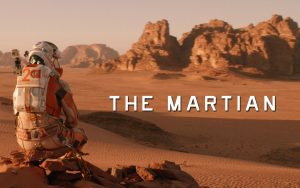 I saw The Martian last night at the Denver Science Museum‘s IMAX theater, as part of the Denver Film Society’s annual sci-fi film fest. It was good to see the film again, especially on a giant screen, and especially when a Mars expert joined us to discuss the film.

Unlike many of the films we watch as part of this series, The Martian doesn’t lend itself to deep discussion about its meaning. It’s a straightforward survival story, a hero’s journey. It does, however, lend itself to great discussions about science, about Mars, and about the realities of trying to survive on a planet that isn’t Earth. The movie is chock full of good science, much of which was carefully researched by Andy Weir, the author of the book that spawned the film.

However, of course, there are some things that occurred in the film that are not feasible, done instead to make an exciting and visually appealing film. These include:

1. The storm. The storm at the beginning of the film, the giant dust storm that put Matt Damon’s character in jeopardy and started everything. would never happen on Mars. Mars has a very thin atmosphere that couldn’t generate that kind of storm. It does, however, generate dust devils and milder storms that will cover various structures in dust or, in at least one instance, shroud the entire planet in dust. The scientist at the talk suggested that a more realistic problem would have been some issue with solar radiation, a serious concern without a magnetic field to shield Mars from the radiation and a factor that challenges the scientists bent on having a human set foot on Mars.

2. The topography. The scenery in the film, with its gorgeous red soil and craggy mountains, actually comes from Jordan, the footage of which was then transferred to a green screen in Europe where the actual scenes were shot. The red was added. According to the scientist, and to the pictures he showed us, actual Mars is quite sandy and rocky like in the movie, but it’s relatively flat with only small peaks. Moreover, the sunsets we enjoyed in the film look quite different in real life. They have a bluish cast, likely due to a lack of the atmosphere that contains the particles needed to create sunset colors.

3. The farming. In the story, the protagonist creates a makeshift greenhouse and grows the potatoes that wind up keeping him alive. Apparently, recent research has shown that the soil on Mars indicates high levels or perchlorates, substances that have been shown to thwart life (including bacteria). The author had no way of knowing that when he worked on the book, and it’s feasible with less toxic soil to growing things if you have fertilizer and water.

Interestingly, I also wondered if one could safely live on that many potatoes. Potatoes are nightshade plants, which are high in alkaloids and thus somewhat toxic. In small amounts, the amounts we consume, this isn’t an issue for most. But with daily ingestion over a long period, I wonder if the toxicity would create problems. I finally got up the nerve to raise my hand and pose that question, but we ran out of time.

I mention these issues not to criticize the story or film, neither of which deserve such criticism. It was a good film, and the source material put considerable effort into doing research to make the story not only entertaining, but scientifically feasible. And it succeeded in that goal beyond that of most science fiction. As a sci-fi author myself, I know how vastly time-consuming research can be, and have a great appreciation for the sheer amount of work that Andy Weir put into that book.

Rather than criticism, I wanted to offer some education on what the reality of what conditions are really like on Mars and, by extension, address some of the challenges NASA and others face when hoping to set foot on Mars. The scientist at the film said that NASA is aiming for 2030-ish for that goal. I look forward to that day.