Understanding Genetics: What are SNPs? 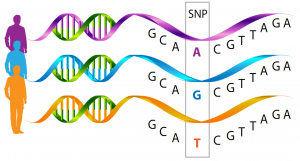 In a recent article, entitled “What Does it Mean to Have “The Gene” for Something? Not What You Think…“, I explained basic genetic variation. In summary, I talked about the fact that no one actually has “the gene for” some trait or disease, but instead they have the allele or variant necessary for that trait or disease.

To sum up that article:

So, in that last article, I used a VNTR (variable number of tandem repeats) as an example of different versions of one gene. However, today, much of the genotyping that’s done in research and used by 23andMe and similar companies focuses on SNPs (pronounced Snips), which stands for Single Nucleotide Polymorphisms.

To show you what a SNP looks like, let’s use the example of Gene D again:

This time, instead of the red representing a VNTR, it represents a SNP. The variation in the gene is due to ONE change in ONE nucleotide. That’s all it takes to produce a different result. So, if Gene D coded for eye color, you could say Allele 1 codes for brown eyes while Allele 2 codes for blue eyes.

When dealing with actual genetic data, where you have two copies of all genes (one from each parent), you would see something more like this:

The genotype for SNP #1 is GG and the genotype for SNP #2 is TA. When you get on a site like 23andMe or LiveWello, they will tell you which variant you have at specific SNP locations in specific genes, and then cite research studies examining any traits or conditions associated with that particular variant.

This kind of genetic information is interesting, but it’s also a hotbed for misunderstanding and misinformation. In the next article, I explain more by offering an example with the so-called “Warrior Gene.”