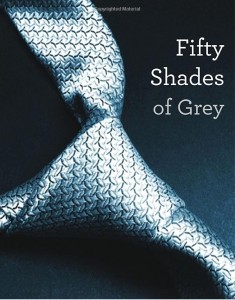 I had no interest in reading 50 Shades of Grey. I don’t read romance or bestsellers, as a general rule. But on a family vacation, someone had a copy and I thought, “Why not?”

At the very least, reading it would allow me to be part of the discussion that was going on (and still is) and would allow me to understand what all these women I knew where talking about. Since reading it, I’ve heard nothing but scathing criticism of the tome from a variety of sources, and for a variety of reasons. And I’m sitting there, a writer, with a shrug and a sheepish look on my face, saying, “I kind of liked it.”

Just recently, I watched the movie adaptation. And yes, I kind of liked that too. I read some of the film reviews–and the comments that followed–and I felt some confusion over why people reacted so badly to this story.

So I am declaring publicly, on the internet, that yes, I enjoyed 50 Shades of Gray.

First, let me address these criticisms:

1. The writing. Yes, 50 Shades didn’t have excellent writing. But I’ve read worse. And, the fact is, 50 Shades proves the truism that many readers and writers don’t want to hear because it flies in the face of all they learned in their English and lit classes: that a great story trumps great writing every time. And before you say the story wasn’t that great, over 100 million books sold and a movie deal suggest otherwise.

4. The “unhealthy” relationship. The central plot of 50 Shades is the relationship between Anna and Christian. Christian has issues, Anna is young and naive, but they fall for each other whether they want to or not. A lot of reviews I read lambasted Anna for being pathetic, Christian for being abusive, and the entire idea of inflicting pain on someone you care about as being twisted and sick. People seemed to think it was a bad example of what relationships should be and/or glorified tolerating abuse because a man is rich or handsome or because you love him.

But here’s the thing. Besides the obvious, which is that this book is fiction, it’s romance… it’s FANTASY, the things that people hate about the Anna-Christian relationship are the very things that made the story work. Their relationship did have problems. Christian’s behavior was controlling, and a controlling man isn’t good. But while controlling behavior is a sign of an abuser, it’s not sufficient by itself to earn the “abuser” label. Christian tried in many ways to control Anna’s behavior, partially out of his desire to be a dom and partially out of concern for her health and safety, both of which become issues in the story. But while Anna experiments with letting Christian be dominant, she never really signs the papers or accedes to him. At times, she defies him. A truly abusive man would make a woman pay for any attempts to defy him, and he would continue escalating until he got the control he wanted. Christian never did this. And even if in the real world there are no men like Christian, and a real controlling man wouldn’t have Christian’s good side, this is–I’ll say it again–a piece of fiction. If you don’t want people influenced by fictitious or unrealistic portrayals of relationships, then simply ban all books and film.

Christian’s controlling side, his dark side, his desire to take Anna into a dom/sub relationship, his personal issues… these things create the tension in the story. There was always a bit of danger there. Readers want to know: will he go too far, or will he change? What’s driving his behavior? Christian’s history is revealed as the series goes on, and the reader gets a peek into the psyche of a complicated man. We all know he’s capable of love, but something holds him back from seeking it.

And these questions, this kind of tension… is why I enjoyed the book. I didn’t love it, but I enjoyed it. I like stories about relationships, and all the complications that can arise when two people engage with one another and bring all their emotional baggage with them. Reading it, I kept wanting to know what would happen next in the Anna-Christian saga. And when you want to know that, you’ve found a good book.