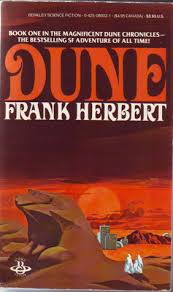 Anyone who’s every read science fiction knows that it can vary considerably. I don’t just mean in terms of quality… I’m talking about the plot, characters, world-building, tone, and ideas.

For example, look at Isaac Asimov’s Foundation, which had grand ideas about an empire of galactic proportions and a man’s ability to predict its fall and rebuild. Big ideas, but little to no character development and world-building.

Then, look at Frank Herbert’s Dune, which created a fascinating world of different peoples and their lust for power. In addition to its nod to ecology and conservation, it had religious themes and a bit of fantasy. By the way, I love this older cover for the book.

And what about Ray Bradbury’s Fahrenheit 451, a disturbing dystopian novel about the kind of world where firefighters burn books rather than fight fires and information is considered dangerous: memorable characters, thought-provoking ideas, but simple plot.

There’s also the novels and series of S.L. Viehl, space opera that makes for a fun read but is light on ideas or heavy science.

I could go on and on. Some have attempted to classify science fiction novels into sub-genres. This Writing World article does a decent job of it and includes well-known examples of each sub-genre. Here are the types, from the article: