The Dystopia of Dystopias: George Orwell’s 1984 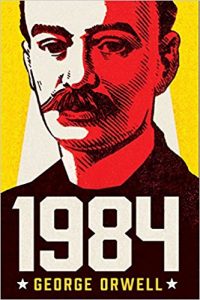 Well, in the time of Trump, why not join the masses in a read of George Orwell’s 1984? I quickly saw that the current political climate, disturbing as it is, bears little resemblance to what goes on in Orwell’s book. Yet, I think it and other dystopian novels are worth a read now and again to remind us of what can go wrong if we the people forget that government exists to serve us, not the other way around. All it takes is a mixture of fear, ignorance, and a need to look to some powerful leader for salvation instead of the people, to allow the next tyrant into power.

Pros: 1984 is well-written in terms of style (better than some other classic sci-fi books), and I found myself looking up several of the words he uses, something I rarely need to do. It’s intelligent and rich with ideas about governing the masses and the masses being governed. There are some gem quotes:

“Orthodoxy means not thinking–not needing to think. Orthodoxy is unconsciousness.”

“Proles and animals are free.”

“There was a direct, intimate connection between chastity and political orthodoxy.”

“Talking to her, he realised how easy it was to present an appearance of orthodoxy while having no grasp whatever of what orthodoxy meant. In a way, the world-view imposed itself most successfully on people incapable of understanding it.”

“They [the High] are then overthrown by the Middle, who enlist the Low on their side by pretending to them that they are fighting for liberty and justice.”

“That it sought power because men in the mass were frail cowardly creatures who cold not endure liberty or face the truth, and must be ruled over and systematically deceived by others who were stronger than themselves. That the choice for mankind lay between freedom and happiness, and that, for the great bulk of mankind, happiness was better.”

And, of course, that doozy of a last line.

I’m guessing Orwell was not a high-serotonin sort of dude.

I admit it took me a long time to get through the book, but not because it’s the darkest book I’ve ever read. The character development is decent but the story dragged, bogged down in exceedingly long paragraphs filled with an excess of ideas. I found the part where Winston reads the book (which means we do too) SO dull. 1984 feels more like a description of a dystopian world with a bit of a story thrown in for good measure. More story would have made it amazing.