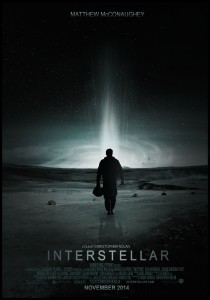 Interstellar is one of those films where the trailer told you little, if anything at all, about the film. It didn’t need to: merely having the Nolan name (both brothers) was enough. And, as I’ve said before, good films don’t have to show much in their trailers because reputation (and, subsequently, word of mouth) does the work instead.

Interstellar is true science fiction. While many films fall generally into the science fiction/fantasy (SFF) genre, your average SFF flick isn’t usually true sci-fi. The plethora of superhero films certainly fall under the fantasy category, as does the entire Star Wars series. While I don’t quibble that much about how to define science fiction and recognize that many sub-genres of sci-fi exist, most people would say that science fiction examines (or speculates) on scientific or technological issues in society and how changing them could impact the human race. And Interstellar does this well.

[This article has minor spoilers, but not to the usual degree of my analyses]

Synopsis: The film is set in the very near future, when Earth’s food supplies are dwindling due to environmental problems and a blight that is wiping out crops to the point where corn seems to be the only survivor. To feed humanity, farmers have become key players in this world, and Matthew McConaughey’s character Cooper is an astronaut turned farmer. Through a series of highly improbable events possibly due to an intelligent alien species, Cooper is led to a secret NASA facility where he is asked to make a huge sacrifice… leave his family and fly NASA’s ship to follow up on eight pioneers who traveled to eight different, possibly habitable planets. These scientists have spent years collecting data and it’s time to follow up on it, pick the best of the lot, and then attempt to take what’s left of the human race to settle there.

Complexity: Nolan isn’t known for his simple scripts or ideas. While Interstellar shares similarity to Gravity, it’s far more complex than Gravity was… yet despite the plot involving complex physics concepts (relativity, time dilation, gravity, multiple dimensions), occasionally confusing sci-fi mainstays (wormholes, black holes, time travel), and even a more cosmic or spiritual aspect, Interstellar remained easy to understand. Of course, that disappointed me a little… I admit that during the first half of the film I kept thinking, “This is cool but it’s not Inception.” Inception‘s opacity and multi-layeredness was its genius. Of course, it’s tied for the position of my favorite sci-fi film of all time (along with Blade Runner). Yet Interstellar is complex enough to be interesting.

Getting cosmic: When I watched the commented version of Groundhog Day, Harold Ramis said he received tons of letters from a wide variety of religious groups who believed he was referencing their particular belief system. Barbara DeAngelis, who writes on relationships and spirituality, mentioned once that Groundhog Day is a very cosmic film. And it is. While Interstellar isn’t as cosmic, it did have spiritual themes that were intriguing. When they had to choose between going to Planet X with good data and Planet Y with somewhat less good data, Dr. Brand (Anne Hathaway) makes a strong cosmic claim for Y. The man she loves is there and, even beyond that, she feels a strong pull toward Planet Y. They override her request, but later we find out that her gut feeling was correct. Similarly, the strong bond between Cooper and Murph (his daughter) provides the key to the film’s conclusion, in its own multi-dimensional, circular, cosmic way.

Most people, especially scientists, would conclude that such ideas are hogwash. Data is king, especially in science. Yet, humans (and other living things) are interconnected in ways that traditional empiricism cannot grasp, and the ideas the Nolans put forth here are not so farfetched. Birds and fish can change direction on a dime, all simultaneously. There are studies of dogs going to sit by the door when their owner decides to make the journey back home, even if the time lag is varying and unpredictable for the animal. A study examined two friends meditating in separate rooms; when a stimulus affected the wave patterns of one friend, it affected the wave patterns of the other as well, despite the other not having been exposed to the stimulus. Such phenomena happens at a level most of us aren’t aware of… but something physics can possibly explain.

The science fiction. Good science fiction often asks, “What if?” What if we needed to leave Earth and find a new home? How would we scout out new potential planets that lie within the habitable zones of other star systems? Who would we send there to do recon? How would you get the data back, considering how far away they are and that it took them 2 years to even get to the wormhole? How would you keep the human race alive during all of this, and how, if you found a suitable planet, would you get people there? And if you couldn’t get them there, how else would you start a new population on the new planet, one that had adequate genetic diversity to survive? Interstellar offers interesting answers.

Relationships. Nolan’s films often have interesting and complex relationships in them, something that’s often lacking in science fiction (particularly in sci-fi books). The entire plot of Inception was heavily reliant upon the difficult relationship between Cobb and Mal, and Cobb’s relationship with himself regarding Mal… as was the plot of Memento. Interstellar has no romance or sex, yet the dual father-daughter relationships are an important theme in the film and even the thing that makes the plot work. Extra points to Nolan for having interesting female characters in his films, too.

Visuals. Gravity wins on this front. But Interstellar has such strong performances and story that it doesn’t need to rely on visuals. There are some very cool shots of their vessels traveling in space, a tiny thing in the vast vacuum of space, passing by some planet or phenomenon, showing us just how infinitely small we are when we think in interstellar terms. The scenes filmed on the final planet, with its icy wonders (filmed in Iceland, of course), are cool. There are probably others I’m forgetting, but I’ll get those next time I watch it…

Minor quibbles. The area Cooper and his family live in is plagued by dust… dust in the house, in their lungs, in huge dust storms from which they must seek shelter. But dust must come from somewhere: sand dunes, desert, or a “dust bowl” region that hasn’t seen rain. Yet the landscape in the film was relatively lush and lacked the dust with which to cause such problems. They should have made it appear more arid.

I’m not done writing about Interstellar yet. Go see it and tell me all that you thought about it.

Update: I saw Interstellar again, on the Denver Science Museum’s IMAX screen. Yes. It was as good as I’d hoped it would be, not to mention the great discussion we had afterward with a local film professor. And, when they took a poll, the majority of the audience was seeing the film for the first time.

The visuals were breathtaking, competing easily with those of Gravity and delightfully (mostly) free of CGI. The music is spectacular: apparently, it was composed primarily on the organ to give it an organic feel, and Nolan had Hans Zimmer put it together without knowing the movie’s plot, or even that it was science fiction. That scene with the tidal waves, where the time dilation has its most profound effects, is still the most tense and my favorite of the film. Definitely now one of my top sci-fi films.