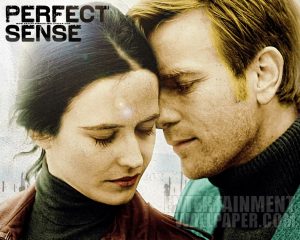 I just saw Perfect Sense at the Sie Film Center, part of the Denver Film Society and Denver Science Museum’s science fiction film fest. The fest is in its 3rd year and I’ve gone every year. In past years I cherry-picked films I wanted to see, but this year I purchased a pass for all 5 films, including Perfect Sense.

Out of the entire theater, I was only one of about three people who’d seen the film already. I was in a certain kind of mood and stumbled upon the film in Netflix the first time around. And I’m glad for that; it’s an intense film, even more impactful on the big screen, and the second time allowed me to view it differently.

Synopsis: Some unnamed blight attacks humans across the world, wiping out each of their senses one at a time. It’s an apocalypse of sorts. Two people whose livelihoods directly relate to the blight — she’s an epidemiologist who studies the breakout and spread of disease, he’s a chef whose living depends on functioning senses — come together somehow and experience it together.

The senses are lost in this order, preceded by a flare-up of extremely intense emotions:

1. Smell goes first. It’s preceded by intense feelings of grief, for the loss of the memories that were associated with all the smells one has sniffed in one’s life. According to the scientist who spoke after the film, this association is quite real. We all know smells can trigger powerful memories, but it’s true that the loss of one’s sense of smell means the permanent loss of those associations.

2. Next is taste, preceded by intense fear and then intense cravings. There is no scientific basis for this pairing.

3. Third to go is hearing, preceded by anger and rage. Also no scientific basis for this pairing.

4. Last is sight, preceded by love, including acceptance, forgiveness, and gratitude.

Of course, there’s one missing. Touch. But one can’t lose one’s sense of touch and survive, not without full use of other senses. As the scientist said, it’s probably the sense we most take for granted.

During this progression, we see people all across the world dealing with these successive losses in nearly exactly the same crazy, wild, but predictable unexpected ways. And we see our hero and heroine experience them together, going from their individual loveless states to one of falling in love.

But what does it all mean? In the discussion afterward, many had good ideas about what the film was trying to say. Some found it profoundly disturbing, others uplifting. Some (including Eva Green, apparently) thought it was about love, about “losing your senses” in love or about surpassing the barriers to love. Others saw it as the human spirit fighting on, regardless of the odds. They talked about what “perfect sense” meant — is there a perfect sense? Or is “perfect sense” a play on words to denote some other aspect of existence?

I haven’t decided. What I do see, however, is grief stages. When there’s loss, there are predictable emotions that follow.

Loss and sorrow. Fear. Anger. Then, once you’ve faced it all: love and acceptance.

They occur in different order and in different ways depending on the person, but they’re there. In the film they occur in predictable order and pretty much simultaneously across the world, which would never happen in real life and which leads one to believe the film isn’t about the “blight” at all, but how people dealt with it in their very human, useful and useless ways.

Think about someone who’s terminally ill. Again, everyone deals with such a thing differently, but you will typically see those emotions, often culminating in peace and love before death comes. More peace and love than you see among those whose death’s aren’t impending, for sure.

I’d love to hear your take on Perfect Sense.