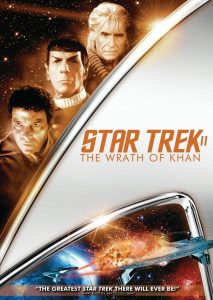 Spoiler Alert: I’m going to spoil the film here. Which probably doesn’t matter, because pretty much everyone has seen this classic…

Well, on Star Date 9/13/16, this rogue scientist finally–FINALLY–saw the film that many Star Trek fans say is the best of the Star Trek films: The Wrath of Khan. The Denver Film Society has put on a Star Trek at 50 series at the Sie Film Center, with showings of two TOS episodes and three Star Trek films plus discussion with local professor and Star Trek fan Vincent Piturro.

Incidentally, I watched the film only days after seeing “Space Seed,” the Star Trek TOS episode where Khan is first introduced. That was a first for me as well.

To be honest, as much as I love Star Trek, I never did watch the original series. I tried about 10 years ago, but the pilot was enough and I never developed an interest to see any more. Hey, it was before my time! And although I am old enough to have watched it in syndication before The Next Generation was released, I had no interest at that age.

I recall an old boyfriend of mine insisting we watch one of the first episodes of TNG (“The Naked Now“). He, like many men my age, grew up watching TOS in syndication. I was dubious but watched all the same. I had no idea that several years later, having graduated with a science degree and moved to Colorado during winter (where I knew only one person), I would see that very same episode with a new eye and begin my journey as a Star Trek lover.

Anyway, on to the film. First, I liked “Space Seed” too. When the camera closed in on Khan’s still-hibernating face, I gasped. I knew that face. That was Ricardo Montalban. That was Khan! Of course, once he awakened, I immediately disliked him, which means he would turn out to be a great villain. My only gripe about the episode is how they portrayed the historian as such a feminine fool, willing to subjugate herself so easily to Khan and risk the ship. But such portrayals of women are a function of that period in our history, and we can’t beat Star Trek too hard with the diversity/strong-female-character stick since the show was so far ahead of other shows from that time.

For the film, the powers that be shuttled Roddenberry to a consultant role and found a new director, all in the hopes of getting better reception than they had for the first movie. The film, released 15 years after “Space Seed,” was well-received by fans and critics. When still on the drawing table, many of the starring actors initially resisted accepting their famous roles, feeling like it had been too long or that they were too old. Through various means, the bosses managed to get them to sign on.

I enjoyed the film. It was well-paced, well-shot, and had good performances. I still marvel at how different Shatner seems in his role as Kirk than his more contemporary roles (Miss Congeniality comes to mind, a film I’ve always enjoyed). He was so serious, so understated. I can see why he’s so popular and why many choose him as their favorite Star Trek captain. And it was really fun to see Kirstie Alley play a Vulcan in her first major role.

Somehow, I managed to be surprised when Spock dies at the end. It didn’t upset me as much as it normally would, given that I know he appears in later shows, having aged. He’s EASILY my favorite TOS character.