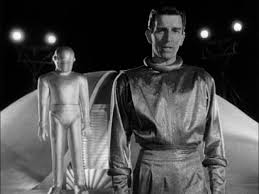 Gort and Klaatu, addressing the American public in front of their flying saucer.

In a desire to build up my science fiction film education, I’ve been slowly adding to my Science Fiction Film Extravaganza list of films. Finally, I decided to delve into the classics. That, of course, includes The Day the Earth Stood Still, the original 1951 version.

Was I excited to watch it? Not really. But watch it I did (it’s on Netflix streaming), and I found it to be well made, well-acted, intelligent, and touching upon important themes.

Synopsis [SPOILERS]: A flying saucer lands  in Washington DC, its only occupants a humanoid male and a large robot. Earth’s first inclination is to get scared, and a nervous soldier lobs a shot at the alien. He’s hospitalized, but manages to heal himself. The alien, Klaatu, talks to those in power and desires a gathering of world leaders so that he can relay a message. He’s refused and kept under guard, so he escapes and goes to live among normal people (Helen and her son). He manages to reach a prominent scientist, show his superior intelligence, and explain that he’s from a more advanced planet and that the other worlds are gravely concerned about Earth’s development of rockets and dangerous atomic weapons. He wants to warn them to stop, or else they will face elimination. Long story short, word spreads about Klaatu and the ship, panic and fear rise, a manhunt for him commences, and he gets shot at again. Gort the robot saves him, Helen delivers Klaatu’s message of warning, and they leave.

When I was growing up, my stepdad, a heavy reader like all my parents, told us about a book in which the story’s last four words changed the entire book. He mentioned it more than once and I always found that idea interesting. After I became a sci-fi author, my stepdad brought the book up again — apparently it was science fiction. He went into more detail about the story, its ending, and the importance of those four words. I’ve thought about it ever since.

After watching The Day the Earth Stood Still, I checked out some reviews and found that the film is based on a Harry Bates’ novella Farewell to the Master… a story in which [SPOILER] the last four words change the entire story.

I think it’s time for me to buy the damned story. I just downloaded it.

Another thing that impressed me about the film was the Helen character. She was a “strong female” who spoke her mind, who raised her son alone, and who wasn’t inclined to accept a marriage proposal without considering it first. I’d forgotten that women in 30s and 40s films often had real chutzpah, before the 50s and 60s turned them into helpless damsels needing their faces slapped for being “hysterical.”

Finally, of course, one of the main themes of the film is xenophobia, also an ever-present theme in my Korvali Chronicles sci-fi book series. Fear of outsiders, whether aliens, people from other countries, or people of other ethnicities, is a powerful theme that lends itself well to science fiction. The Day the Earth Stood Still was released in 1951, the peak of the Cold War, when America was gripped by fear of nuclear war and Communist invasion. This is a time when we had a “House Un-American Activities Committee” engaging in witch hunts to find “Communist sympathizers,” and Hollywood attracted the attention of this committee with its creations. Apparently, this period engendered other similarly-themed sci-fi films such as The Thing From Another World and Invasion of the Body Snatchers. This article gives some perspective on these films.

This film is a classic for a reason, and it stands the test of time.

The impact of the Cold War on Film and Culture