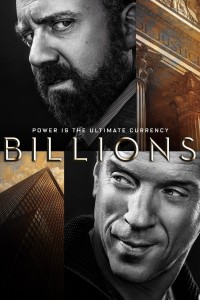 Billions is my new favorite show. It’s running on Sunday nights on Showtime, and as of today they’ve shown 8 episodes. The show pits two power-seeking, ego-driven men against one another: a wildly successful billionaire who runs a hedge fund company, and the US Attorney general who knows the billionaire is crooked and is determine to bring him down.

You’re probably wondering why this is my current favorite. It’s not science fiction, after all. Truth be told, my favorite shows are rarely sci-fi or fantasy. I loved Star Trek TNG and Voyager and was practically addicted to Battlestar Galactica… but otherwise I’m drawn most to shows that aren’t sci-fi or fantasy. To some extent, I often learn more from other genres and some of those shows wind up inspiring my stories. For example, HBOs The Wire was an astoundingly good show that inspired the plotting for The Operative.

Once in a while, the dialogue could use some tweaking… and it’s my opinion that Chuck gives too many metaphorical speeches about justice. And I struggle with Axe’s wife, for reasons I’m having a hard time pinning down. But I love the show and look forward to seeing how the first season concludes.