Movie Cliches: The Parent Who Disappeared 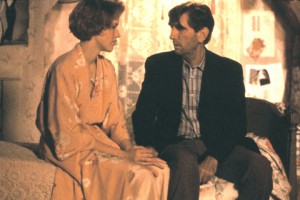 TV and movies are bastions for characters with Mom and Dad issues. That’s cool. After all, to believe that our parents don’t have a substantial influence on our development would be to live in denial. And it gives a character some depth to know that they too have struggled with a parental relationship.

It’s especially compelling when a character grew up with only one parent. Despite the common nature of divorce in US society, most children of divorce still have some kind of relationship with both parents. So when one parent is completely out of the picture, you know it’s due to a serious reason that likely impacted the character in a major way.

One cliche you see too often is The Parent Who Disappeared. At some point in the story, the character shares (often with a trusted significant other) that he or she has no idea where Mom or Dad is and hasn’t seen or heard from the parent since an early age. Then, the character goes on to say, “He/she went out for cigarettes and never came back.”

Here are a few examples, all from shows or movies I adore:

This is a cliche, and not a good one. It’s overused, and it’s not believable. Here’s why:

In Homeland, the thing with Carrie’s mom is especially absurd because her father was bipolar and untreated and “hard to live with,” spurring the mom to leave. But it makes no sense at all why the healthier spouse would abandon all and leave her children to the care of a man who’s so mentally ill that she needed to leave him. Never happen. If anything, she would leave with the kids.

Another cliche that’s worse and used even more often is the “Where were you? I needed you!”, where an adolescent is angry at a parent (usually Dad) for “not being there,” usually because Dad was “messed up” or just too devoted to the work that’s he’s obsessed with and really good at. A theme in these movies is the dad repairing the shredded relationship with the angry teen. This does happen, of course, but the angry teen thing gets old and so do the ready-made speeches about being abandoned. There are a variety of reactions to such a loss, and angry sanctimony is just one of them.

If you want to do Mom and Dad drama, there’s a world of fodder out there. Talk to people about their frustrations and struggles with their parents, about troubled parents or difficult divorces or custody arrangements. Read books about parenting and about healing relationships with parents.