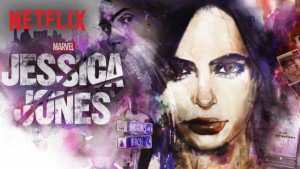 I started watching Jessica Jones some time ago, mostly because it was available on Netflix and I’d run out of interesting shows to watch. I’m in the middle of episode 9 (out of 12).

It’s not my favorite show and I’m not that motivated to finish the season. But I will. The show has a lot going for it. Here’s a breakdown of my pros and cons: