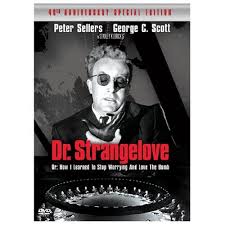 From SIE film center: Arguably the greatest black comedy ever made, Stanley Kubrick’s cold war classic is the ultimate satire of the nuclear age. Dr. Strangelove is a perfect spoof of political and military insanity, beginning when General Jack D. Ripper (Sterling Hayden), a maniacal warrior obsessed with “the purity of precious bodily fluids,” mounts his singular campaign against Communism by ordering a squadron of B-52 bombers to attack the Soviet Union. The Soviets counter the threat with a so-called “Doomsday Device,” and the world hangs in the balance while the U.S. president (Peter Sellers) engages in hilarious hot-line negotiations with his Soviet counterpart. Sellers also plays a British military attaché and the mad bomb-maker Dr. Strangelove; George C. Scott is outrageously frantic as General Buck Turgidson, whose presidential advice consists mainly of panic and statistics about “acceptable losses.” With dialogue (“You can’t fight here! This is the war room!”) and images (Slim Pickens’s character riding the bomb to oblivion) that have become a part of our cultural vocabulary, Kubrick’s film regularly appears on critics’ lists of the all-time best.

Guardians of the Galaxy: I’ll be seeing this one with my scifi buddy Nick… also available in 3D

Synopsis: After stealing a mysterious orb, American pilot/outlaw hero Peter Quill is hunted down and thrown into an inter-galactic prison. In order to secure his freedom, Quill reluctantly joins forces with alien bandits Drax, Gamora, Rocket and Groot to form an alliance of misfits known as the Guardians of the Galaxy, and with the all-powerful villain Ronan hunting the orb, the fate of the universe is in their hands.

Synopsis: The haunting story of THE GIVER centers on Jonas, a young man who lives in a seemingly ideal, if colorless, world of conformity and contentment. Yet as he begins to spend time with The Giver, who is the sole keeper of all the community’s memories, Jonas quickly begins to discover the dark and deadly truths of his community’s secret past. With this newfound power of knowledge, he realizes that the stakes are higher than imagined – a matter of life and death for himself and those he loves most. At extreme odds, Jonas knows that he must escape their world to protect them all – a challenge that no one has ever succeeded at before.