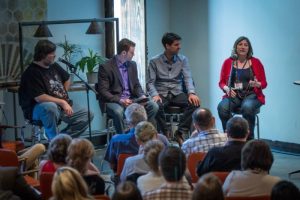 I just returned from the Smarter Artist Summit in Austin, TX. And it was fucking awesome.

If you’ve ever listened to the Self-Publishing Podcast (SPP), run by indie authors Johnny B. Truant, Sean Platt, and David Wright, you already know about the Smarter Artist Summit (SAS), their annual conference, in its second year now.

I first discovered the SPP guys through Joanna Penn, who was one of the first authors I followed for book publishing and marketing advice. I liked her Facebook page and one day I spotted a post for a book promo, a box set of three books: one of hers, David Gaughran’s Let’s Get Visible, and Truant/Platt’s Write. Publish. Repeat. All for 99 cents. That was possibly the first time in my life I downloaded a book without spending 30-60 minutes reading its description and reviews.

I got a lot out of all three books, but it was Write. Publish. Repeat. that spoke to me at that deeper level. It was the first time I read a book on how to succeed as an indie publisher and felt like, “Yes. These are my people.” I began listening to the podcast and have been a fan of the SPP guys’ growing empire ever since.

One of the challenges of being an author, particularly an indie author, is that it’s isolating. We sit in our houses and write, market, and social media… but when it comes time for interaction with other writers, help from those who’ve been there, or cross-promotion, we’re screwed. I realized I was screwed if I didn’t get some help, that my biggest struggle as an indie author was having no tribe, and that my isolation was killing my ability to succeed at the level I wanted.

So when I realized I missed the first summit and heard the guys gushing about it on SPP, I decided right there that I would go to SAS in 2017. I checked that site so many freaking times for when the tickets would go on sale; it got to the point where when I typed the letter “S” into my browser, the SAS landing page would autoload.

You’re a writer. You’re an introvert. You want to succeed at fulfilling your dream to be a full-time author. And, perhaps most of all, you want to meet your tribe, offer them help, and get help from them. Now imagine a big room filled with people who have the same characteristics. They love to write. They want to succeed. They want to help you succeed. And they have the sense of humor and positive energy you want due to the massively generous and fun tone set by the guys who run the show. That’s SAS.

It’s two full days of talks, with plenty of talking and fun time after hours (and sometimes after midnight). They invite speakers who offer what their community needs, not just big names that lure participants like you’ll see at other conferences. What’s amazing is that the group is still small enough that you can talk to some of these experts in person and get your questions answered.

For example, I talked to Mark LeFebvre from Kobo books to ask him about Kobo promotions, something I’d had no luck with. He not only answered my questions, he personally helped me with an issue I had and was incredibly polite and helpful. I also talked to Chris Fox, author of Write To Market and other great books on selling and marketing. I was struggling a lot with a particular issue and was pretty nervous to ask for his help (I’m one of those idiots who hates asking for help), but I did and he offered extremely helpful advice and made me feel comfortable.

There were plenty of other experts there as well, all of whom made themselves available day and night: David Gaughran, Kevin Tumlinson from Draft2Digital, two representatives from BookBub, a group from Podium Publishing, and many others.

If you want to see some of the nuggets and takeaways from the summit, check out Mark LeFebvre’s great post on SAS17.

And we had a LOT of fun. Between eating BBQ at mealtimes, drinks in the evening, and karaoke for introverts (yes, really), we tore through Austin. I stayed up late both nights of the summit to talk to people. I NEVER stay up late and don’t really like going out, especially to bars. But I did both and more for these people. That’s how much I loved being there and the people I met.

The agenda for both days: 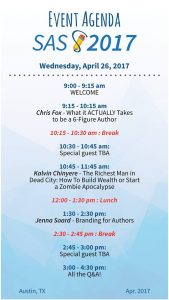 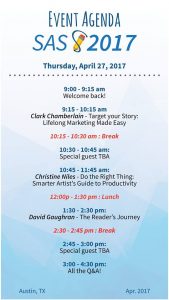 Last but Never, Ever Least… 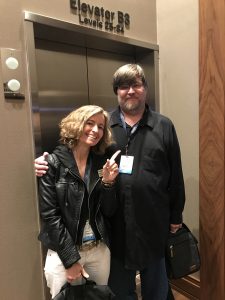 Dave Wright, humoring me for a pic 🙂

Another awesome thing: Johnny, Sean, and Dave stayed up front throughout the entire summit to introduce the speakers, to facilitate the talks, and to add commentary or ask questions. They weren’t just running it; they were part of it. They were busy as hell for those 2 days, but they were around and available for questions, pictures, and hugs. Yes, hugs.

People never think I’m a hugger… but I am.

And, perhaps best of all, I got to talk to Dave Wright. I totally dig the guys and the entire Sterling and Stone team; they’re the ones who set the stage for the amazing time everyone had at SAS, who created the warm, fun, and inclusive climate that made me and others feel at home. Yet, above and beyond all that, I secretly hoped most of all that I’d get to talk to Dave. By total luck, I did. For the few minutes we had, we talked about real stuff. And boy is he a sweetheart, an amazing listener, and someone who loves to delve into the deep topics. A real searcher. I would never have thought to ask for a pic, but someone else did and so he totally humored me.

If you’ve listened to the Self-Publishing Podcast and like their vibe, consider attending SAS. If you haven’t, check them out. They’ve created more than vehicles to dispense good advice; they’ve created an amazing community. And I’m glad as hell I’m now a part of it.