The Characters of Mr. Robot 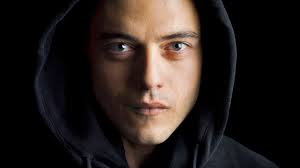 A couple of friends recommended Mr. Robot to me recently. I’d never heard of it, so I’m very glad they did.

The USA series began just weeks ago and has completed the first 5 episodes. The show follows Elliot, a hacker who uses his well-developed tech skills for (mostly) good as he gets pulled into Mr. Robot’s group of merry hackers with Big Plans.

Elliot. This is a well-drawn, complex character who grabs your attention right away. He’s intelligent, sensitive, knows how to read people, and has a strong protective streak. He also suffers from anxiety (particularly the social kind) and depression, and takes morphine to dull his pain while (mostly) remaining below the dosage threshold that will cause him problems.

His protective side has him hacking into social media and email accounts of those he cares for, such as his childhood friend Angela, his therapist Krista, and his neighbor/dealer Shayla. He does the same for those he seeks to protect these women from, including Angela’s douchey boyfriend, Krista’s pretending-to-be-unmarried eHarmony paramour, and Shayla’s violent, terrifying supplier. He sees the world as a dangerous place filled with crooked people, a worldview likely generated from the level of knowledge he’s privy to as well as the dark filter through which an untreated anxious/depressed person can view humanity. Like a lot of misanthropes, he feels isolated from others and disgusted by their human flaws, but at his core wants to protect them. He even goes so far as to shake down Krista’s lying paramour until the asshole gives up the dog he abuses, leaving it in Elliot’s protective (albeit not entirely capable) hands.

The choice of actor seems important, even crucial, here. What makes Elliot interesting is his vulnerabilities. By choosing an actor who’s young, and who looks like he does, is effective. He has a very strong, masculine jaw which, in some, can make a man look hard, even scary. But then he has those big, feeling eyes and a smaller body type, allowing his vulnerability to blend with his hardness.

Mr. Robot. A hacker who sucks Elliot into the world of Big Hacking, Mr. Robot (played by Christian Slater) has larger plans than protecting the few people in his life. He seeks major social change via economic shakeup, and orchestrates a plan that not only requires Elliot’s involvement but nearly guarantees his compliance since it involves the company who gave Elliot’s beloved father the leukemia that killed him when Elliot was only 8. One day manipulative and untrustworthy, the next supportive and even fatherly, you never quite know whether Mr. Robot is a true antagonist. Some have interesting views about Mr. Robot and his relationship with Elliot, but I’m going to wait before talking about that.

The female characters offer an interesting array of types, interesting enough that the show was praised for it in an Atlantic article. This is a big deal for a show examining hacking and cracking, a topic that lends itself a bit too easily to action tropes with few or narrowly developed females. An anxious but caring Angela supports Elliot but doesn’t seek his protection, focusing on her career in the information protection business. With low self-worth to the point of endangering herself, Shayla helps care for Elliot’s new scruffy dog while bemoaning the loss of her supplier/tormentor, a bloodshot-eyed, menacing dude whom Elliot secretly gets busted for his dealing. Darlene, a hacker in Mr. Robot’s crew, is obnoxious and tempestuous and, we find later, passionate about their cause.

The male characters are a mixed bag so far. On the one hand, you have Elliot’s kindly gay boss, Michel, who looks out for him, and a host of other colorful men who exist in their various hackerworlds. On the other, you have Fernando: while well-acted, Fernando is drawn as unidimensionally misogynistic and evil, a low class scumbag who isn’t all that interesting. And you have Tyrell, the Evil Corp executive, playing the powerful narcissistic sociopath with unusual sexual proclivities and a similarly drawn wife. Both play Evil Man, the former serving the low SES, minority stereotype, and the latter the wealthy, white, privileged stereotype type. I’d like to see the creators round these characters out a bit and let us see who they really are.

We’re only 5 episodes in. It will be interesting to see where the show takes the story and its characters.

What do think so far about Mr. Robot?