When I’ve exhibited at comic and science fiction conventions, people will often remark upon my book covers. This is especially true for the Korvali Chronicles trilogy covers, which have several characteristics that set them apart from other book covers.

For one, the covers don’t conform to the conventions of most science fiction, space opera, or military sci-fi books. There are no references to starships, planets, or space. That has its pros and cons and can be a risky choice, but I chose it because I’m not a fan of many sci-fi book covers. Another thing people remark upon is how clean and minimalist the covers are. That’s a stark contrast from most covers in the genre, which are quite busy and have a lot of colors, images, and elements. Finally, the physical cover itself is matte, not glossy, which also goes against convention. The books feel velvety, and someone in the printing industry told me that the cover material is actually called velvet matte. Who knew?

So, beyond those things, what is the significance of the Korvali Chronicles cover designs and why did I chose them? 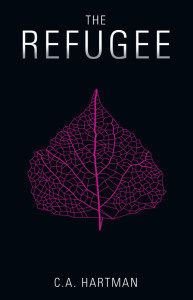 The cover for The Refugee, the first book in the trilogy, is a magenta leaf. It represents the crest of the Shereb clan among the Korvali people, the clan that Eshel, the refugee himself, belonged to before he escaped. The leaf, like all Korvali clan crests, is tattooed upon the left hand of its members.

The symbol represents the leaf of a tiny, moss-like, water-borne plant that grows in the rivulets flowing throughout Fallal Hall’s gardens. The pigment is not one you would see naturally on Earth and it’s used to create the tattoo. The leaves don’t look exactly like this image. This is actually an artistic rendition of the leaf, created by the Korvali as a symbol of the clan. If you look closely, you will notice that there is literally no curved edge in the entire piece. To me, that gives it a more linear feel that fits the Korvali.

I told Chris Voeller my idea and sent him images of leaves I’d hunted down on Google, especially those with lots of netting and veins. I wanted the leaf to be cordate (heart-shaped), mostly because it would fit better on a hand. He came up with this design, which I loved from moment one. I chose it to represent Eshel, since the first book is primarily about him and his notorious escape not just from his people, but from those who were most privileged and powerful.

A few have assumed it was an aspen leaf… not an unfair assumption given its shape and the fact that I live in Colorado, where aspens are ubiquitous. However, I didn’t have an aspen in mind when I drummed up this idea; it was the shape that I wanted.

From a cultural perspective, this crest is the showiest and most ornate of the Korvali crests. Magenta is bright, showy, even regal (think purple). It fits with the Shereb clan’s arrogance and desire for power.

Why a black background? Black is mysterious. Black is the unknown, the vacuum of space. All of these things represent Eshel, his escape, and the journey he and Catherine and everyone else go on in the trilogy. 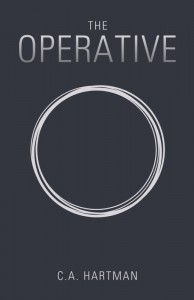 The cover for the second book, The Operative, has a different feel. [Spoiler Alert: You’ll need to have read Book 2]. “Operative” can refer to several people in the book, the most obvious of which is Catherine, who is moonlighting as a clandestine operative for the ship’s brass. But when you consider that an operative is anyone who serves as agent, spy, or someone who’s up to secret things, I think Ashan plays this role quite well.

Ashan is a key player in Book 2, despite him having a relatively small role. He’s a former Korvali Guardsman and member of the Moshal clan. The Moshal often become Guard; their clan emphasizes simplicity, trustworthiness, and protection. I wanted a clan crest, and thus a book cover, that embodied that.

The directions I gave Chris for this one were less clear than any other I’ve done. I wanted to see what he’d come up with. I wanted something circular, something that could convey wholeness and integrity, that could look like a ring or a planet, like the planet the Moshal protect with their Guard duty. The Korvali are xenophobes, but they are united and whole in many ways and both Eshel and Ashan want to restore that integrity to their people.

Also, the background color is dark gray. The Moshal wear dark gray robes. Gray could also represent Ashan’s neutrality (he resists being part of Eshel’s cause at first), his careful and conservative nature (he’s not a risk-taker like Eshel is), or even the depression he suffers from after the loss of his lifemate. 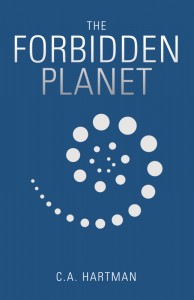 Finally, the cover for the last book in the trilogy, The Forbidden Planet. The moniker is not an homage to the classic film, but represents the nickname the humans give Korvalis, referring to the fact that no one’s allowed to visit. The third book spends much of its time there.

My original idea for this cover changed as the story evolved. For a long time, the plan was to put the crest of the Osecal on the cover, which is the multi-branched vines in gray. This crest appeared on some of the dead who escaped with Eshel.

The Osecal ruled Korvalis before the Shereb usurped power, and my plan was to restore them to power after [Book 3 Spoiler Alert] Eshel and Catherine and the gang come over to take Elisan down. But, that’s not what came about. That ending didn’t fit who the Korvali really are, people who are too smart for monarchies but who just don’t like change.

So, given that the Osecal played no significant role in Book 3, who do I put on the cover? Nothing other that the crest of the Tobeb clan, a spiral design that represents the spiral shape of the archipelago that’s part of their territory. Why them? They’re the ones who find Catherine and save her life. They rescue her from the talons of the great birds and try to revive her. They think she’s dead but still offer her a ritual burial despite her being human. They keep her until Eshel shows and discovers that she’s in stasis.

That shade of blue is what I imagine’s Korvalis’s oceans to look like when the clouds briefly clear. It’s close to what I imagine the Shereb robes to look like. Blue is calm, it’s water and sky, all of which fit who the Korvali are. A spiral is a powerful symbol as well. It is the shape of sea creatures and galaxies. It’s biological and cosmic. It can represent evolution and one’s connection to larger things, to the spiritual. This fits the Tobeb, who are a primitive tribe (by choice), who carve rocks into giant animals, who revere the giant birds, who knew to preserve Catherine’s body despite her being the enemy.

As you can see, a lot of thought goes into a book cover. Color, font, design, symbols… all impact the potential reader on some level.

If you want to stay updated on my latest books, appearances, and any freebies or special deals, sign up for my email list!