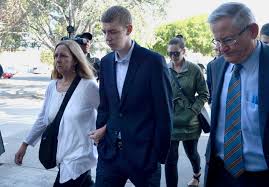 I first came across the Stanford assault case on Facebook. One friend posted about it, then another, then another. Women and men. All disgusted.

The nutshell: a woman went to a Stanford campus party, only to wake up and be told she’d been sexually assaulted. The assailant, a Stanford swimmer, had assaulted her behind a dumpster when she was unconscious. Two men saw the assault and intervened, holding the assailant (who tried to run) until the cops came. When it came to sentencing, prosecutors asked for 6 years; he got 6 months. The victim wrote a long letter about his sentencing, detailing all she went through and expressing her anger at the unfairness of the punishment.

I read a good portion of her letter while at Phoenix Comicon, standing in line to see Jupiter through a telescope with a lens that’s stronger than mine. There I was, having a great time and seeing the far reaches of our solar system, just to be reminded of the shit we face in this world. And why I write.

We all know the outrages of such a situation, but let’s list them anyway:

I recently published Daughters of Anarchy Season 1, a book about a woman who does her part to clean up a corrupt City. Without spoiling too much, there’s a scene in which a group of privileged male students from a private university do something bad (although nothing nearly this bad) and get rung up for it. One of their rich fathers gets on the news and expresses outrage at the punishment, seeing the situation only from the young mens’ perspectives and never understanding the gravity of the act and what doing what they did says about them. It’s the old “they’re good rich boys from good rich families, not common criminals!” thing. When writing that sub-plot, I thought I was being cynical and using the father’s reaction to make some searing (if exaggerated) social commentary. But it seems, again, that fiction often represents truth better than non-fiction does.

Recently, I admit I had begun to bemoan the long speeches by women saying “Instead of teaching women to protect themselves against rape, teach men to not rape.” My irritation wasn’t because I don’t agree with where they’re coming from, but because of their over-simplified view of rape and rape culture. But it’s situations like this that make me completely understand why “rape culture” has become such a buzzword.

This Stanford assault fully embodies every goddamned problem we have when it comes to rape:

The problem with most rapes is that it’s her word against his, which makes prosecution extremely difficult. No matter how guilty he is, without evidence it’s difficult to convict. But this case is extraordinary in that there were witnesses: 2 men saw the assailant having sex with an unresponsive woman and intervened. They knew something was wrong. They knew it immediately.

And that brings us to two bigger, broader problems:

1. This guy got off easy because he’s white and privileged.

The judge expressed concern about how sentencing the guilty assailant to prison would impact him negatively. He saw him as a good kid with no prior record who didn’t deserve a regular sentence.

Translation: He’s a blonde-haired, blue-eyed, innocent-faced privileged male from Stanford, not to mention an athlete!, and we shouldn’t derail his life too much because he isn’t one of those bad kids from bad neighborhoods. If this assailant were a minority, a construction worker, poor, or even had a meaner face, we all know the sentence would have differed. See this article to support this point.

2. A lot of people don’t see rape for the disgusting, heinous crime that it is.

This is a much tougher issue to get your arms around. But if you talk to enough people, male and female (but especially male), casual attitudes about rape will leak out. Most men know that rape is wrong and would never do it, but even some of those men show unempathetic views toward rape and rape survivors, especially when the accused isn’t some obvious hardened (minority) criminal. They don’t GET IT. And this is a problem. When these men go to parties and get drunk, or become fathers of boys, or become judges, these biases come into play and create a culture that doesn’t respect the seriousness of rape.

Here’s the thing: I was in college once. I partied. And there were a handful of occasions where I over-imbibed and wound up praying to the porcelain god all night long. I wasn’t blacked out, but I was totally incapacitated and would have no chance of warding off an attack. And during those times, my male friends (and any other men around) never laid a hand on me, except maybe to ensure I was okay while sleeping near the toilet all night.

Likewise, a friend of mine drank so much at a popular bar we went to that she passed out in the parking lot. A male stranger found her and helped her. He didn’t rape her, when he easily could have.

This is what this clueless, out of touch judge doesn’t get – that there’s a qualitative difference between a man who would force himself on a super drunk or unconscious woman, and one who wouldn’t. Most wouldn’t. And the ones who would are the problem in our society. They’re the ones whose fathers stick up for them no matter how repugnant their behavior, refer to rape as “action,” who think their privileged little brats deserved to be sheltered from the long arm of the law because they’re special enough to be born into privilege.

I’ve gotten to the point where I dislike the word privilege – not because it isn’t an important concept, but because it’s so often misused and misunderstood. Yet, the Stanford assault situation has made it clear that privilege is a thing, a real thing that poisons our culture.

The Motivations of Rape

This is beyond the scope of this article and an even bigger issue to wrap your mind around. Yet, one thing that is very clear to me is that most people are ignorant about who rapes and why. Men tend to think it’s about sex; women think it’s about power. It’s about both and much more, and motivations vary greatly depending on the attacker.

In conclusion, what I want is for people to start taking this issue seriously. Rape impacts everyone, and a society where woman aren’t safe is not a healthy society. Do your research and learn. That’s a good beginning to ensuring that rape is taken seriously when it happens.