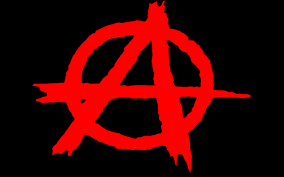 Anyone who knows me or who’s read my science fiction knows that my areas of expertise include psychology, genetics, and biology. Political science and economics, not so much. I recently published the first book in a new series entitled Daughters of Anarchy (DOA). The series — science fiction with a good dose of thriller/noir — is about a woman who uses her knowledge of genetics and her position of power to “clean up” her corrupt city.

At Denver Comic Con last June, just after rolling out the first season of DOA, people were intrigued by the title and then by the book’s premise. Eventually, I had a guy ask about my use of the word “anarchy” and why I chose it. Having never gotten that question before, I stumbled my way through an explanation. I’d spent time considering my use of “anarchy” in the title and whether or not it was the right word. However, the decision was an intuitive one, not a scientific one. Somehow, “anarchy” had the right feel, given the disorder in the story and the protagonist’s desire to restore order in her own special way.

This man nodded at my jumbled explanation, then went on to offer his own views on anarchy — for him, essentially a setup where people come together to rule themselves without needing a large or formal government. I asked him if he was a libertarian; he said no, that he’s an anarchist. Before that moment, I’d never known that anarchism as a political belief system existed. Moreover, I met THREE other anarchists that day, each one offering a similar perspective and each educating me in a way that wasn’t in the least bit dogmatic or judgmental.

I was intrigued. And I had to know more.

1) A state of disorder due to absence or nonrecognition of authority.
“He must ensure public order in a country threatened with anarchy”
Synonyms: lawlessness, nihilism, mobocracy, revolution, insurrection, disorder, chaos, mayhem, tumult, turmoil
“Conditions are dangerously ripe for anarchy”

2) Absence of government and absolute freedom of the individual, regarded as a political ideal.

Anarchy is the condition of a society, entity, group of people, or a single person that rejects illegitimate hierarchies. It originally meant leaderlessness, but in 1840, Pierre-Joseph Proudhon adopted the term in his treatise What Is Property? to refer to a new political philosophy, anarchism, which advocates stateless societies based on voluntary associations. In practical terms, anarchy can refer to the curtailment or abolition of government.

Anarchism is a political philosophy that advocates self-governed societies based on voluntary institutions. These are often described as stateless societies, although several authors have defined them more specifically as institutions based on non-hierarchical free associations. Anarchism considers the state to be undesirable, unnecessary, and harmful, because anarchists generally believe that human beings are capable of managing their own affairs on the basis of creativity, cooperation, and mutual respect, and when making individual decisions they are taking into the account others.

Google’s definition fits with the average person’s view on what anarchy is, including mine… at least until Denver Comic Con. However, Wikipedia’s treatment seems more fitting with the views of the anarchists I met.

People tend to think of anarchy as “no rules.” But as someone somewhere put it, anarchy technically means “no rulers.” I found this idea extremely interesting. Part of me loves the idea of a small or nonexistent government, allowing people to grow up and govern themselves in a rational fashion, while another (larger) part of me doesn’t believe such a feat is possible, given human nature.

When I ran some of this by a close friend of mind who is far more knowledgeable about political systems, he said, “Anarchism doesn’t work.” Perhaps it doesn’t. However, I suspect it could under the right conditions. Paleolithic man, arranged in hunter-gatherer societies, didn’t need governments. They existed in small enough groups that self-management was achievable. Once the human population grew, once we gathered into larger “cities,” government or some type of rule became the norm and our history books are littered with widely varying examples of this.

Interestingly, John Zerzan, an anarchist known for his pen-pal relationship with Ted “Unabomber” Kaczynski, is known for idealizing paleolithic life. Discussions of this idea went on between the two men, and Kaczynski’s eventual criticism of Zerzan’s position effectively ended their long friendship. Read this article for more information on that.

I’ll have more to say on this topic as time goes on. But from what I’ve already learned, I can say that “anarchy” was the perfect word for the title of my novel series, for many reasons. Sometimes, one’s intuition is right on.