Why “The Counselor” was a Worthwhile Film 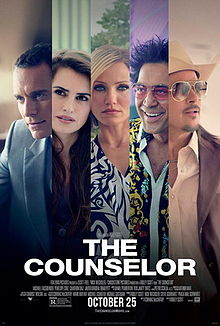 When I first saw the trailer for The Counselor, I was interested. Months passed. When I came across this Word & Film article, I realized I’d missed the film’s release entirely. And after reading the article, I found out why: it didn’t do well in the theaters and critics skewered it.

The Counselor’s screenplay was written by famed novelist Cormac McCarthy and directed by Ridley Scott. Many question whether a novelist can write a good screenplay, as novels and screenplays vastly differ in terms of structure, format, and goal. Some say novelists can’t let go of control over their story and are unable (or unwilling) to accept the changes that are necessary to turn a novel into a film. Others say moviemakers dislike when the screenwriter shows up on set because they know he/she shares a close bond with the script as written and may not like it when the actors or director don’t reflect his/her dialogue or vision. Overall, McCarthy’s script was one of the major criticisms of the film.

I ordered it on Netflix immediately. And while it had a few flaws, I thought it was, overall, an extremely interesting and well-made film. Here’s why:

It Deviated From the Expected Story

How many movies about drug dealing have we all seen? And how bored are we of the same old story: some greenhorn gets into the drug business to make money, he struggles at first but then tastes success, he lives the high life with girls and cars and clothes, and then it all begins to fall apart as he becomes excessive, addictive, and more careless while the kingpin/cops/Feds inch their way closer. This film took a different approach, much like Soderbergh’s Traffic did when it looked at the drug trade from multiple angles. It focused, rather darkly, on the negative consequences of the protagonist’s choice to involve himself in a dirty business.

It Didn’t Have the Usual Gender Roles

Every drug movie I can think of showcases men in the lead roles. They have all the power, and the women are little more than pretty trophies who benefit from their drug man’s income and pretend they don’t know what’s going on. In The Counselor, Penelope Cruz’s character is actually naive, having no idea of her fiance’s shady dealings… she is a true innocent and a woman her fiance is head over heels for.

On the other end of the spectrum, we have Cameron Diaz’s character Malkina, a formidable woman who turns out to be the real kingpin. Add her pet cheetahs to the mix, and a special performance on a windshield — along with Cruz’s fiance going down on her in the opening scene — and the film gives the phrase “pussy power” a whole new meaning.

Subtext on Top of Subtext

They say subtext separates the veteran screenwriters from the newbs. In most movies, the subtext feels like it’s heaped on with a shovel and so obvious that even a child could get it. Elysium comes to mind, which I’ll discuss in another article sometime. But The Counselor had layers of subtext that took a second screening for me to really appreciate. This is something I imagine a novelist can master with much more ease than can a screenwriter.

For example: In one of the opening scenes, Malkina sends out her cheetahs to hunt down a jackrabbit. They succeed. Malkina has cheetah spots tattooed on her and lined eyes that make her look obviously feline. Supposedly “Malkina” refers to some kind of cat. A cat can symbolize feminine power or treachery. She’s the hunter; the others, including her partner, are the prey. And most of what happens in the film is foreshadowed in this early scene.

Much of the movie is spent in 1-on-1 dialogue that either foreshadows or parallels the protagonist’s increasingly dim situation. It’s heady stuff… see the next section…

This is the kind of dialogue you don’t often see in films. Or if you do, it’s so damned self-conscious that it’s embarrassing to watch. The dialogue was one of the main criticisms of the film. Perhaps too much subtext and philosophizing, and not enough simple English and tough guy aphorisms. I didn’t always like the dialogue, but I liked that it was different.

Was the film perfect? No. But I think, like Lisa Rosman does, that this film will eventually be appreciated.